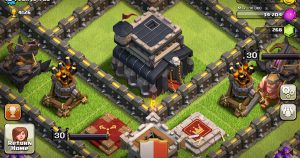 Could  Clash of Clans hit the jackpot by bringing out a video slot?

Clash of Clans is widely regarded as one of the most successful mobile strategy-based games ever released. Even six years after its initial launch, Clash of Clans remains the fifth-highest grossing mobile gaming app in the U.S., generating daily revenue of $614,642 (USD). Although this figure is put somewhat in the shade by the success of Fortnite, the fact remains that tens of millions of people worldwide still play Clash of Clans on their mobile devices daily.

Indeed, the game’s developers, Supercell, recently unveiled a big Clash of Clans update in December. The festive-themed update not only covers our Clash of Clans villages in snow and ice but it also offers a host of new spells, troops and attacking units. Long-serving Clash of Clans fans can also appreciate the arrival of the Shovel of Obstacles, which enables players to move items on their map such as Christmas trees to create magical, festive areas in their villages.

Given the clear appetite that remains for Clash of Clans, with Town Hall 12 capturing the imagination and encouraging people to abandon their Town Hall 11 strategies, what are the chances of the leading iGaming software developers teaming up with Supercell to provide a video slot that expands the franchise into the burgeoning iGaming scene? There are heaps of video slots out there designed and influenced by successful mobile games of the past. For instance, Red Steel is a gangster-inspired Grand Theft Auto spin-off while Twin Spin Deluxe is akin to the hugely popular Bejeweled casual gaming classic.

It’s not hard to imagine the backdrop for video slots based on Clash of Clans. Think of a five-reel slot within the main village, with symbols, such as the ax and even new objects like the Giga Tesla and the Battle Blimp, appearing on the reels and triggering bonus games. With some sections of the Clash of Clans community fearing that the popularity of the game has waned despite the success of Town Hall 12, what better way to reintroduce the franchise to an entirely new demographic of mobile gamers?

Millennials Don’t ‘Get’ Traditional Slots Machines Like the Old Guard

The millennial generation of gamers is less enamored with traditional slot machines than older generations. That’s because millennials are far more interested in “experiences” and games that can immerse them into new environments. It’s why virtual reality (VR) and augmented reality (AR) caused such a stir. That’s why many within the iGaming industry place their chips on a new strategy — making their slots look and play like a classic console game.

Nevada, the home of Las Vegas, is considering a bill that would enable land-based casinos to offer more skill-based slots games, which would tie-in perfectly to strategy franchises such as Clash of Clans. A.G. Burnett, chairman of the Nevada Gaming Control Board reportedly said that the “old style of slots” is outdated and “needs to change.” Burnett added that this could easily be achieved by incorporating “skill and social elements to the slot mix.” There is no doubt that the traditional land-based casino or iGaming operator wants their customers to sit down in front of a slots machine and interact with it for hours on end. But the millennial generation of gamers don’t get a buzz off that style of gaming — they want to consume multiple streams of entertainment at the same time.

Introduced to land-based casinos in the form of a slots game, the retro arcade classic Space Invaders measures the acceptance of skill and strategy-based slots among all ages of players. Although its arrival caused plenty of positive fanfare, there is an undercurrent of thought within the casino scene that skill-based slots ruin their randomized appeal. Some believe that skill or strategy slots games aren’t focused on how much a player wagers. The truth is there can be any game outcome regardless of a player’s reward status or bet size. That’s why traditional slot players aren’t keen on skill-based games, as they don’t always reap the rewards of what they have invested in the machine.

Nevertheless, there appears to be a demand for strategy-style video slots that would allow Supercell to increase the exposure of the Clash of Clans franchise. Some of the top Clash of Clans players have already poured tens of thousands of dollars into their gameplay on iOS and Android devices, suggesting that these players might be happy wagering on the reels, too. It’s a case of watch this space.