Today, I’d like to introduce this new marvelous Town Hall 9 farming base layout. The name of this base is a Latin word which means the shield – Arma. The shield Arma will stop everyone who dare to visit your Storages without asking and give them the most severe chastisement.

The author is this layout is LachlanS and this is the version 2.0 of it! 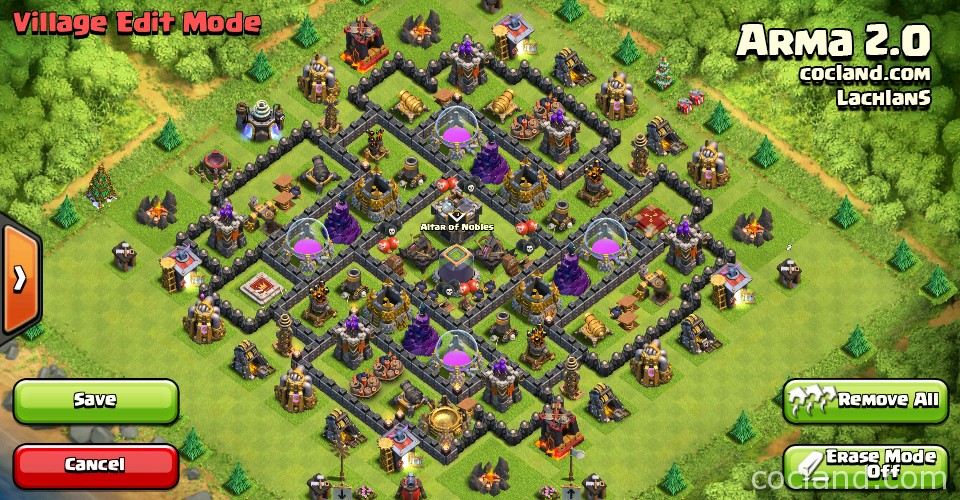 Click here to see the only walls and traps

Most players use their Archer Queen to snipe the Dark Elixir Storage because of her high damage and perfect range. This base can prevent them from doing that easily with the space between the core buildings and the walls. 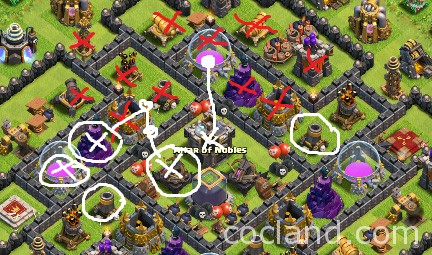 As you can see in the image above, after destroying all X buildings, the Archers and Archer Queen will move to either the Mortar or the Wizard Tower nearby then move around the base until being taken down.

The Hidden Tesla is used as a trap to separate the enemy Giants from normal troops such as Barbarians, Archers or Goblins as you can see in the screenshot below:

Giants: After destroying the Hiden Tesla, the enemy Giants will target the Archer Tower nearby and walking through the Double Giant Bomb for attacking the Cannon and the Spring trap between the Cannon and the next Archer Tower will fly them off. If the attacker has enough Giants to survive after that, those Giants will start hitting the wall in front of the Air Defense and being hit by Tesla and the X-Bows.

Archers: After taking down the hidden Tesla, the enemy Archers will target the Archer Tower and being hit by the Mortar nearby. If the Archer can go inside and hit the Gold Storage, the Giant Bombs will be activated and will be hit by 2 Mortars at the same time.

You can see the Giant Pathing from everywhere in this base.

Normally the attackers want to break the funnels from where it ends, but the Hidden Tesla does a great job is luring the Giants away to protect your first defensive layer 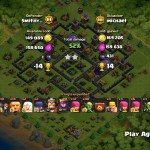 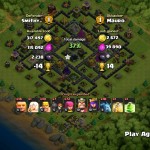 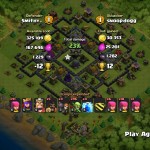 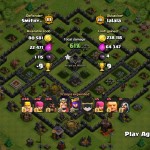 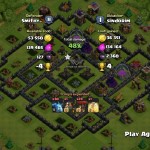 Above are couples of recent defense logs of this TH9 farming bases against different strong army compositions and as we can see, this base works very well. Just try this base and you will love it – that’s all I can say!