Kyoukai is one of the best TH8 War Base layouts that I have ever used since the April 2015 update. This base was designed by macstinger, one of my favorite Clash of Clans base designer. It has Anti-Dragon/GoWi/Hogs and plenty of other features. Let’s take a closer look to see guys! 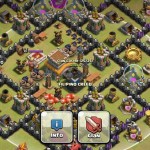 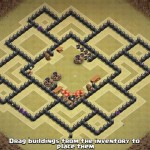 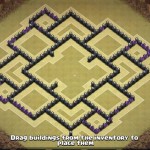 How this TH8 War Base works

In this base, the Air Sweeper can easily force the attackers using Dragons to attack from the back side since nobody wants to face the Air Sweeper, most new players at Town Hall 8 don’t know the AS well. Most of the time, attacker starts raiding from the bottom left side because there is a semi-exposed Air Defense there. This is such a big bait because of many Air traps nearby, which are always ready to stop any Dragon attack.

Here are some features of this TH8 War Base for anti-Dragon:

I was using this base layout and also recording the defense logs for couples of Wars. Nine times out of tens, attackers started the raid from either bottom left or bottom and as a result, none of them could achieve the 3 star win.

Okay so how to attack it with Dragons?

Every base can be 3 starred, of course, so does this one. Luckily I meet this base couples of times in Wars and did 3 star it by using Dragloon coming from the bottom right with 1 Healing Spells and and 2 Rage Spells.

It’s great to share If you have any other way to attack it. Definitely the best way to improve our base is thinking about what we would do If we were the attackers.

Because the Clan troops can be lured from either the bottom and bottom right so most Hog Rider attacks start from there. After spending couples of troops to remove the Clan troops, attackers usually want to attack from there because they don’t want to waste those first troops. Moreover, there is 1 Builder Hut at the very bottom, that’s the sweet place where most players want to take advantage of it to lure and take down CC troops. Sadly, that side is the biggest trap of this base and will always lead the Hog Riders to the Spring Traps and the Double Giant Bomb as you can see in the screenshot below:

The inside Barbarian King and skeleton traps will help you wipe those Hogs out faster!

As we all know, GoWiPe can 2 star every TH8 war base but getting the last star is much harder. Once the enemy troops are get into the core, they will trigger a lot of bombs, traps and get attacked by outside defensive buildings. This base also has quite high number of compartment so it is very hard to 3 star it with GoWiPe.

Last but not least, here are some the recent war logs of this TH8 war base layout against different army compositions. 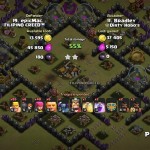 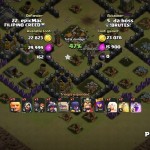 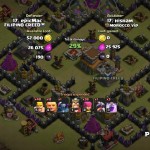 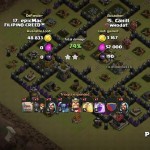 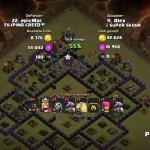 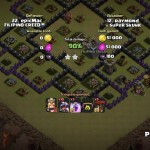 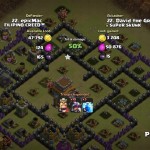 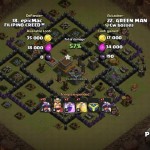 Feel free to comment If you have any idea to improve this base! Hopefully you guys like this TH8 War Base!