TH9 Trophy Base - Push to Champion in just 3 days

Hello guys, nice to see you again in this new Clash of Clans TH9 Trophy Base post! Today, I am going to give you a brand new base from Ash, which successfully helped me push to Champion league in just 3 days. If you are looking for the most easy way to push to Master league or even Champion league, this base is for you! 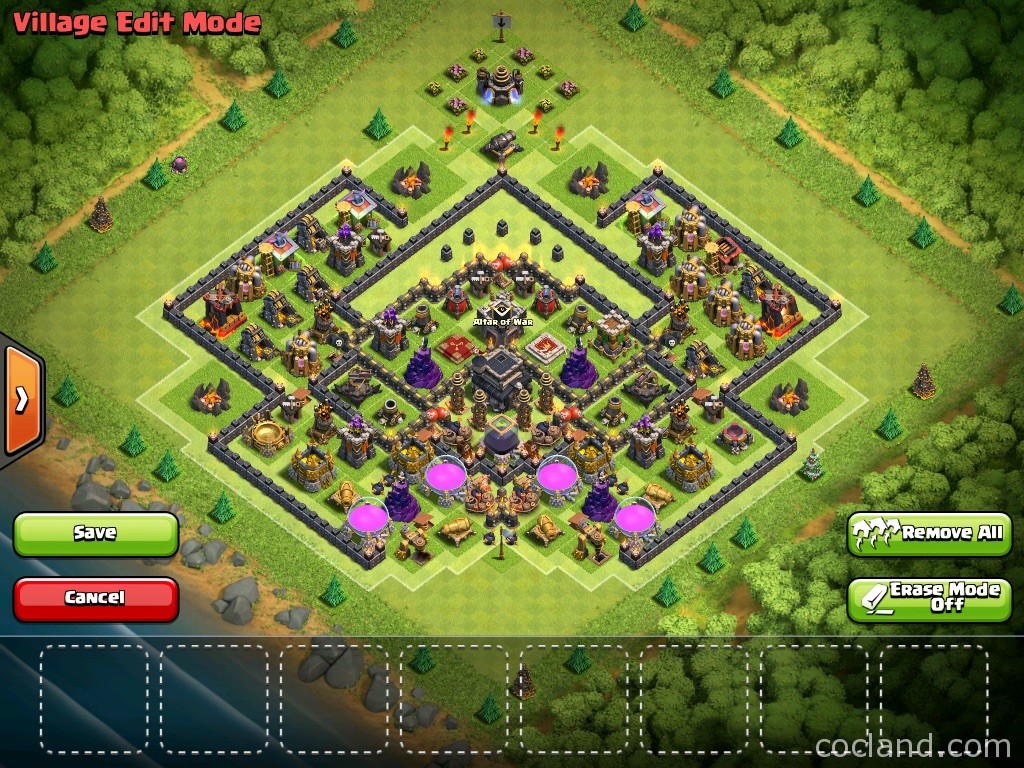 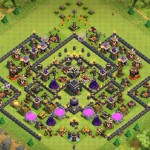 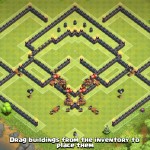 Yes, it took me just 3 days to push from Silver I to Champion III with my Town Hall 9 village. I was also attacking a few times everyday while using this TH9 Trophy Base but that couldn’t give me more than 50 trophies everyday. I still could push to Champion III whether I did attack or not. Sounds great, right?

Push to Champion within 3 days with this TH9 Trophy Base!

There aren’t many good trophy bases for Town Hall 9 out there because Town Hall 9 don’t have the Inferno Tower, there is no way to deal with the Healing Spell. So you are gonna need to force the attacker to attack you in one side and you are goig to have to load up on defense in that particular side. That’s why all Gold Storages, Elixir Storages and the Dark Elixir Storages are placed at the bottom of this base to lure the attackers in attacking this base in that direction.
Obviously this is a trophy base, not a farming base. Its main priority is to win us trophies. That’s why we have the Storages outisde. Those Storages offer a lot of HP.

Okay, now let’s talk about the glorious aspects of this base.

Mechanics – How this base works

If the attackers want to funnel their troops towards the Town Hall, they need to destroy all buildings in 2 sides of the bottom. It is almost impossible in this base because the Storages are all protected by walls outside and the defenses inside. There is a small distance between the wallls and Storages to make sure the enemny Wizards and Archers can’t snipe and remove our Storages. Instead of hitting the Storages, they will be either moving to the bottom or to the Army Camps nearby. You will never face attackers who try to break these sides. If they do that, they will lose lots of troops and don’t have enough firepower to get the Dark Town Hall compartment.

Anti-Queen Core: The enemy Queen can’t target the Town Hall. The Town Hall is placed far away from the reach of the Archer Queen. Also, because of the floating walls, she will always walk around and target other buildings.

Anti-Giant/Golem/Hog/Balloon: As you can see, Giants/Golems are gonna go towards the Wizard Tower ~> Cannon ~> Archer Tower ~> Air Defense and then move up to the top of the base. They will never target the Tesla or anything behind the Storage wall. They will never go inside the core. Most of the time, they will soak lots of damamge and get killed before going to the top.

What about the top of this TH9 Trophy Base?
In order to prevent attackers from attacking from the top, we need to make it a very unappleaing option. That’s why we have the empty compartment right at the top. The reason I don’t place any building inside this compartment is to funnel the enemy troops to the 2 sides and they will go towards the bottom. Balloons will never target the Air Sweepers just as they are very far away.
Even If the attackers place the Jump Spell in the empty compartment, their Giants and Golems will not take that Jump because the Air Sweeper are just too far away compared to the Archer Tower. The same thing with any other troops, they are gonna go around the base and ignore the Jump Spell because there is nothing inside the empty compartment.

Heavily protected Town Hall
The Town Hall is protected by the Barbarian King, the Archer Queen and Clan troops. They will not get triggered until the enemy troops get into the Town Hall compartment.
Air Bombs, Giant Bombs, Spring Traps, Skeleton Traps are always ready to deal with any troop which dare to come inside. The Air Bombs are pretty well placed to prevent Lava Hounds from triggering them.

I know that you really want to see the defense logs of this TH9 Trophy base after reading all those features, right? :D. I have something better for your, they are defense replays, so you can easily see how outstanding this base is, how the mechanics of this base work and lots of mistakes when attackers trying to destroy this TH9 Trophy from the bottom.

This is the best trophy pushing base that I have ever seen for years and for sure. The mechanics of it are even much better than top Town Hall 10 and 10 trophy bases. I hope we will see more bases like this for higher Th10 and 11 in the near feature.