Hey guys it’s Ash and one of the things I’m lacking on my channel are war attack guides for TH8s (and I’ve been really meaning to get a lot new war content for TH8s), so today I’ll be sharing a Hog Rider guide because in my opinion, a mass Hog Rider attack is among of the best 3 star attack strategies for a TH8 and a well planned attack will allow you to 3 star any opposing TH8 base. So I’m going to try my best to make this a very easy to understand and a very easy to learn strategy. First I’m going to teach you guys the fundamentals of the attack strategy, and at the end I’ll show you guys some great examples of 3 star attacks using this strategy. 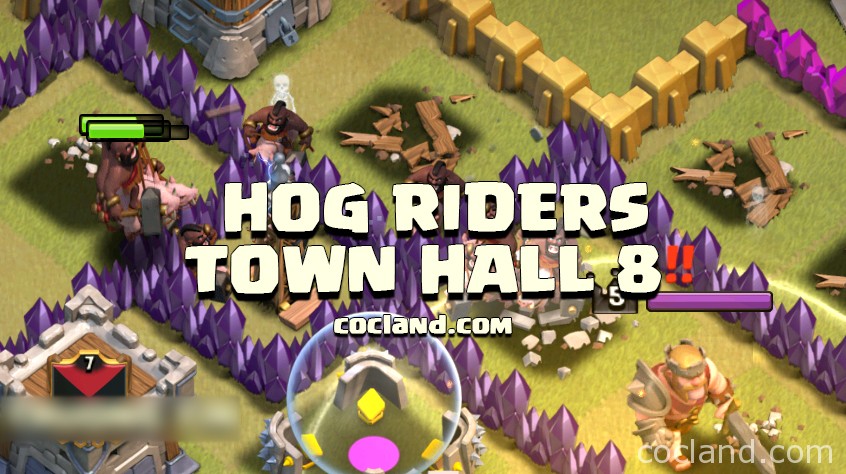 At TH8, you’re able to upgrade your Hog Riders to level 4, which is significantly better than a level 3 Hog Rider and will make it much easier to 3 star TH8s. So if your Hog Rider isn’t level 4 yet and you want to be able to consistently 3 star opposing TH8s with this strategy, then I definitely recommend upgrading to level 4 as soon as possible. Level 3 Hog Riders will work against some bases as well, especially if you properly use this strategy. I would still recommend level 4 Hog Riders for the best chance at 3 starring.

Now I will outline the main threats that you need to worry about when conducting this strategy. If you’re able to remove these threats out the way, then the chances of 3 starring becomes incredibly easy.

What If I can’t lure the Clan troops?

Also, you can take a look at this guide If you want to design your own base with perfect Giant Bomb placement.

The next thing I want to talk about is the pathing of the Hog Riders. It’s very important that you know how Hog Riders will travel so you can easily plan out your attack. Hog Riders are in my opinion one of the easiest troops in the game to understand their pathing just because they’re able to jump over the walls and go straight for the defenses.

Now one fact most people don’t know about Hog Riders is that they have a 0.6 tile attack range, which means that the Hog Rider will attack from a small distance away from the defense. And this is important to know because it has a large impact on how the Hog Riders travel. So I’m going to show you guys some examples how you can easily predict the path that your Hog Riders will travel:

Assuming that you drop your Hogs from those 2 spots and they will attack the Cannon and the Archer Tower at 2 big dot spots. After that, they won’t move to the Wizard Tower behind because those 2 Mortars are closer; after taking 2 Mortars down, Hog Riders will move to the next Air Defense and then the Air Sweeper. 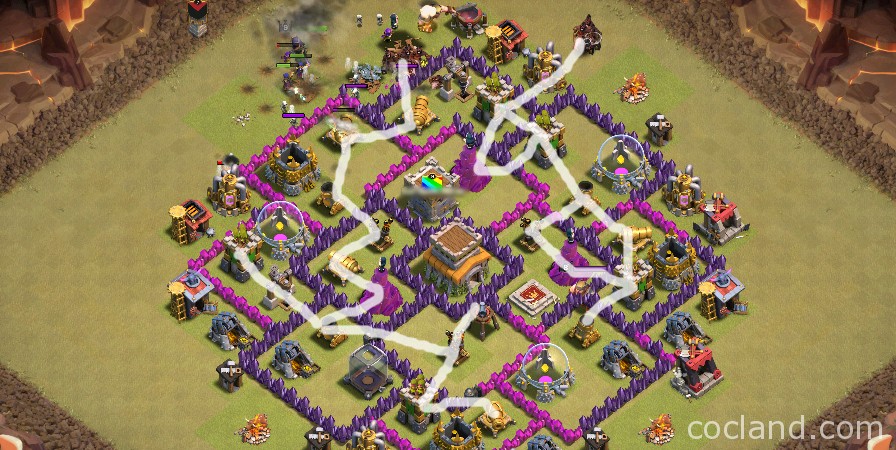 How to use the Healing Spell?

Healing Spell is an extremely important part in any Hog Rider attack. I have seen lots of failed Hog Rider attacks, and most of the time, It’s because the attacker don’t know how to drop the Healing Spell properly. That’s why I wrote a detailed guide about this special topic. You can read more about it at How to heal your Hogs properly.

The last thing I want to talk about is the Kill Squad. The main objective of the kill squad is to disrupt the placement of or trigger or even test for the possible placement of Giant Bombs within a base. As well as possibly remove the opposing Barbarian King and sometimes even lure the Clan Castle if it’s deeply centralized inside the base. Kill squads aren’t always necessarily against some bases, but properly using it will make your life easier and pretty much guarantee a 3 star win on some occasions.

How to attack with Hog Riders

So now I’m going to show you guys some examples of 3 star Hog Rider attacks by Rustie’s Tribe in the video below. It’s an awesome clan full of very friendly and helpful people. Now I also want to state that some of these attacks were conducted by beginners to this strategy, so even though some of their attacks were not perfect, you can see just how powerful the strategy is and how easy it is to learn.