Once you’ve become a good hogger, it’s a fairly common thing to be watching someone’s raid and painfully noticing that a heal spell is placed too early, too late, in the wrong place, or some combination thereof. We have this skill, yet when we go hogging ourselves, all too often do we end up botching the heal placement. We know better, yet we do it anyway.

Something more to consider: Have you ever noticed that a base seems easy to take, and yet the attack fails due to nerves, panic, forgetfulness, or something of the like? It’s really easy to direct an attack when you’re not the one making it, right? There’s a reason for this. There was a study a few years ago that showed that more traffic signs, devices designed to make driving safer, actually made it more dangerous and increased the likelihood of a collision. The more signs there were, the more information the brain had to process in a situation where fractions of a second mattered.

Clash, though less dangerous, has a similar environment. Once you start getting to TH8 level bases and higher, there’s a lot going on in an attack. In fact, there’s so much going on that the brain has to calculate enough information to cause those few fractions of a second to slip by. Make sense? Of course. We do this every time we shout at the tablet for our clan mate to “DROP THAT RAGE SPELL!!!” We simply aren’t having to process the same amount of information as a spectator.

So… How to we improve our attacks by reducing the number of calculations we make while attacking? One way is to rethink the way you use the Healing Spells. You drop them on the troops, and they heal up right? Sure. You can do it like that, and you might be successful on most of your raids, except for that one you failed on and went back to watch what happened.

When you heal your Hog Riers, you’re trying to heal a moving target. To heal a moving target, you have to calculate it’s speed and predict the destination/direction. Not just for one, but for several. You wouldn’t burn a heal spell on anything less than three hogs, would ya?

So here’s the solution. Don’t heal the hogs. Heal the buildings. Specifically the defensive buildings.

Sound weird? Of course. Why would you approach this situation with the thought process that the buildings would be the target for your heal spell? Interestingly enough, the buildings are a stationary target and it doesn’t require much calculation at all to drop a heal on them.

A Hog Rider, while there are still defenses available, will spend all of his time standing next to a defensive building, or on his way to said building. If you can heal a large group of buildings that you know the hogs are en route to, you don’t have to worry much else. Just heal the buildings. The only further thought that has to take place for this to be effective is to note which direction the hogs are coming from and shift the spell one tile in that direction so that they’re standing in the heal while they’re next to the building swinging at it. Let’s take a look: 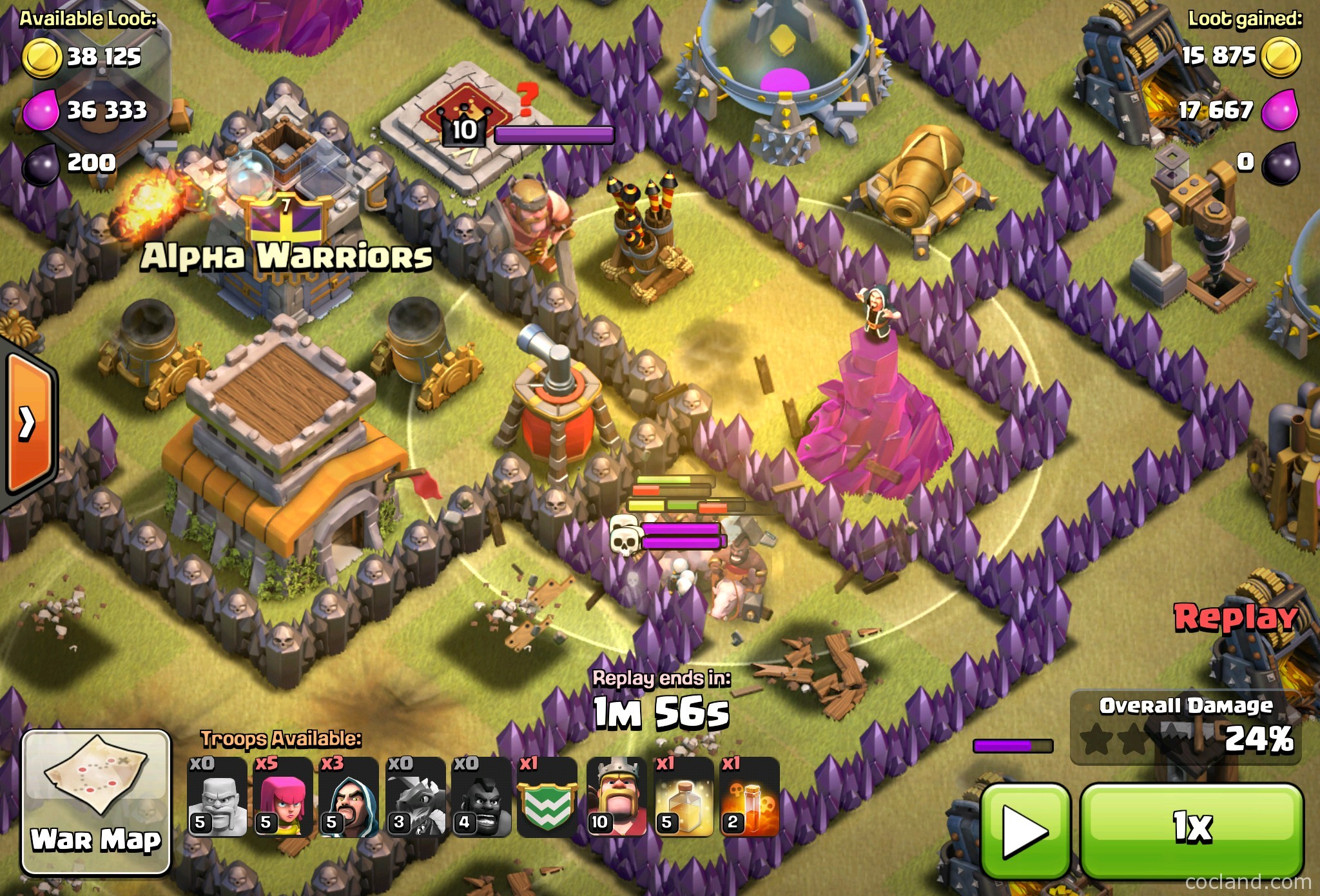 Perfect, right? Yes. Let’s take a look at where the hogs will be standing as the spell runs its course: 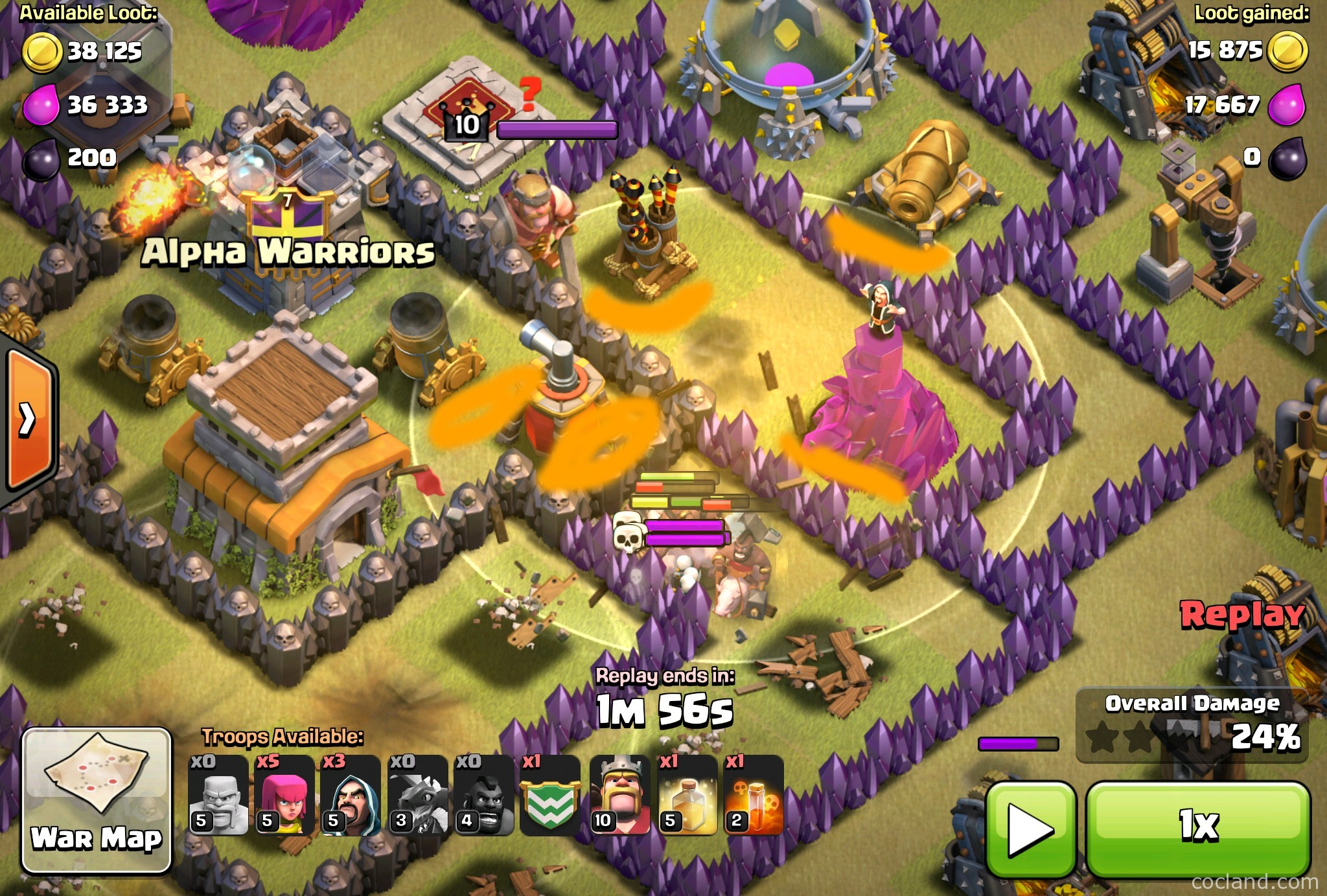 What you don’t see here, is that there’s a giant bomb between that Wizard Tower and Air Defense. No problem, area is prehealed. You know, basic Hog stuff.
Now, let’s take a look at what happened after the hogs began to leave that area: 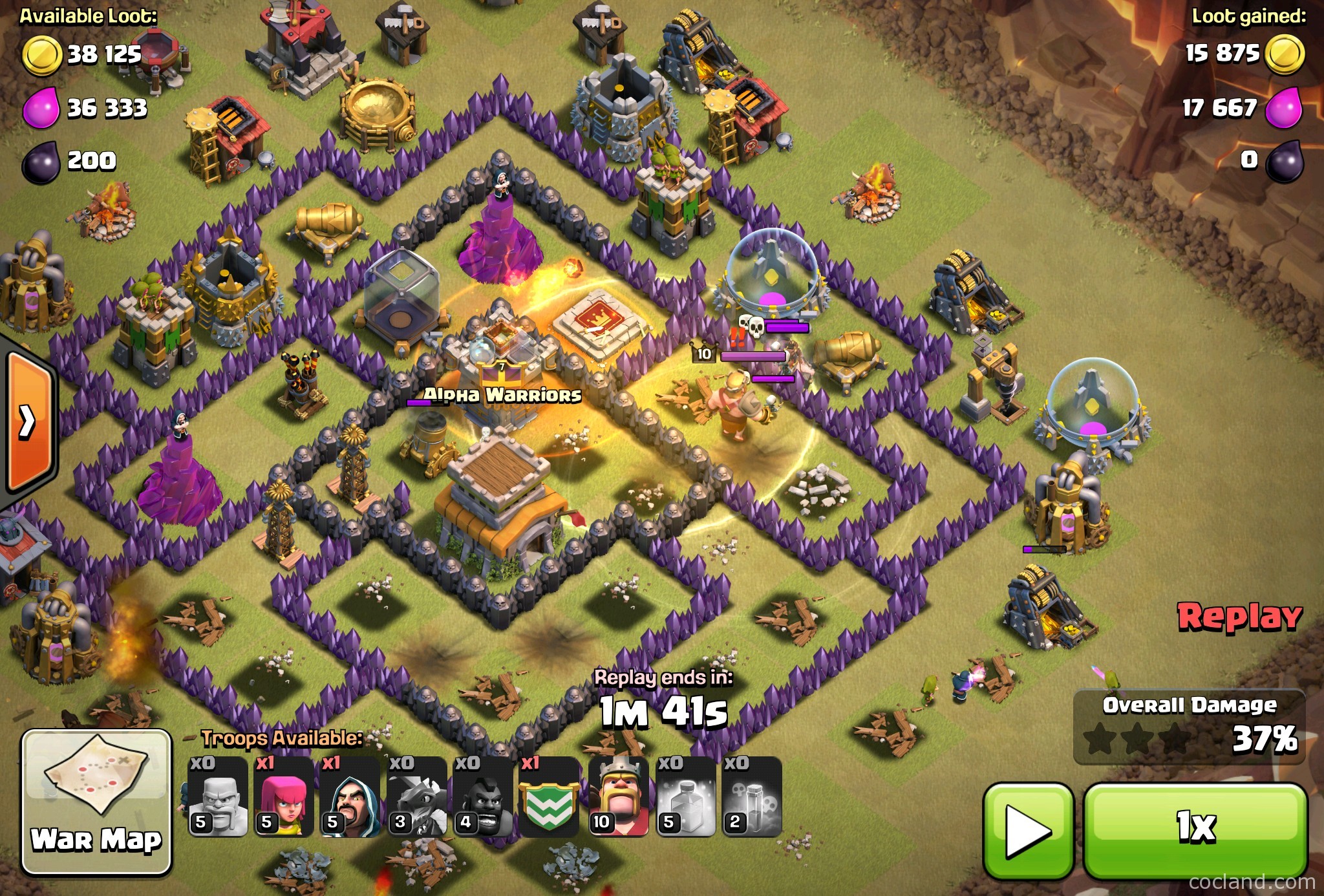 You can see the first heal fading, and the poor placement of the second heal spell. Now, in all fairness, this was a panic heal because there were few hogs left, and they were dwindling, BK and skeletons right on their trail, but consider this: How would that heal be better placed? You can tell that we’re healing one building here, and that the hogs are probably headed to that Archer Tower next. Again, this example with context is a bad one, but for illustration purposes you can see what I’m talking about here.

Let’s take a look at one more. Here we have a TH9 attacking down due to an upgrading BK. Look at those first two heal placements: 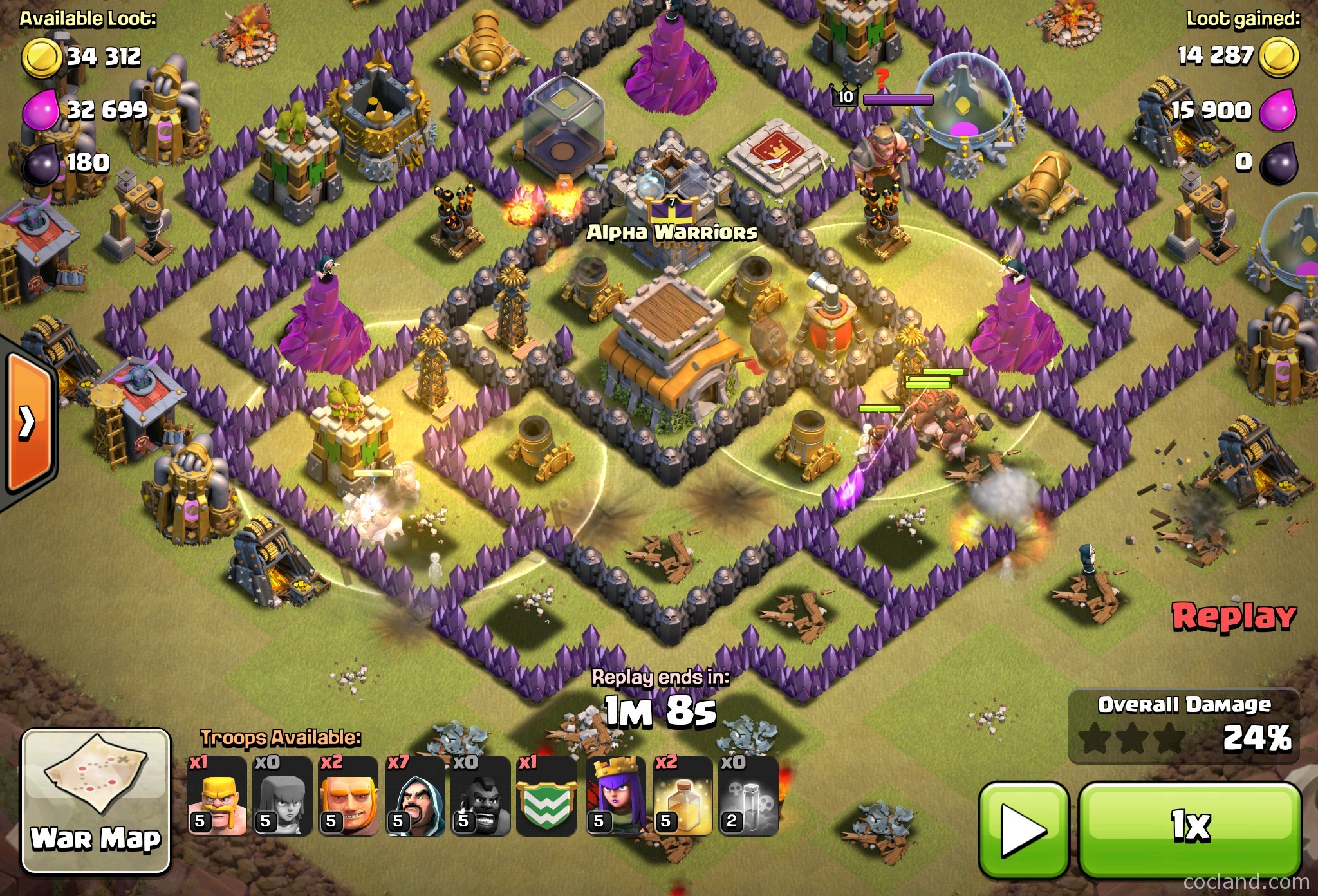 But, for some reason the hogs split in a weird manner, and due to quite a few spent on tripping and defusing the other GBs in the base, there weren’t many left. Shouldn’t have been a problem, but let’s see what happened: 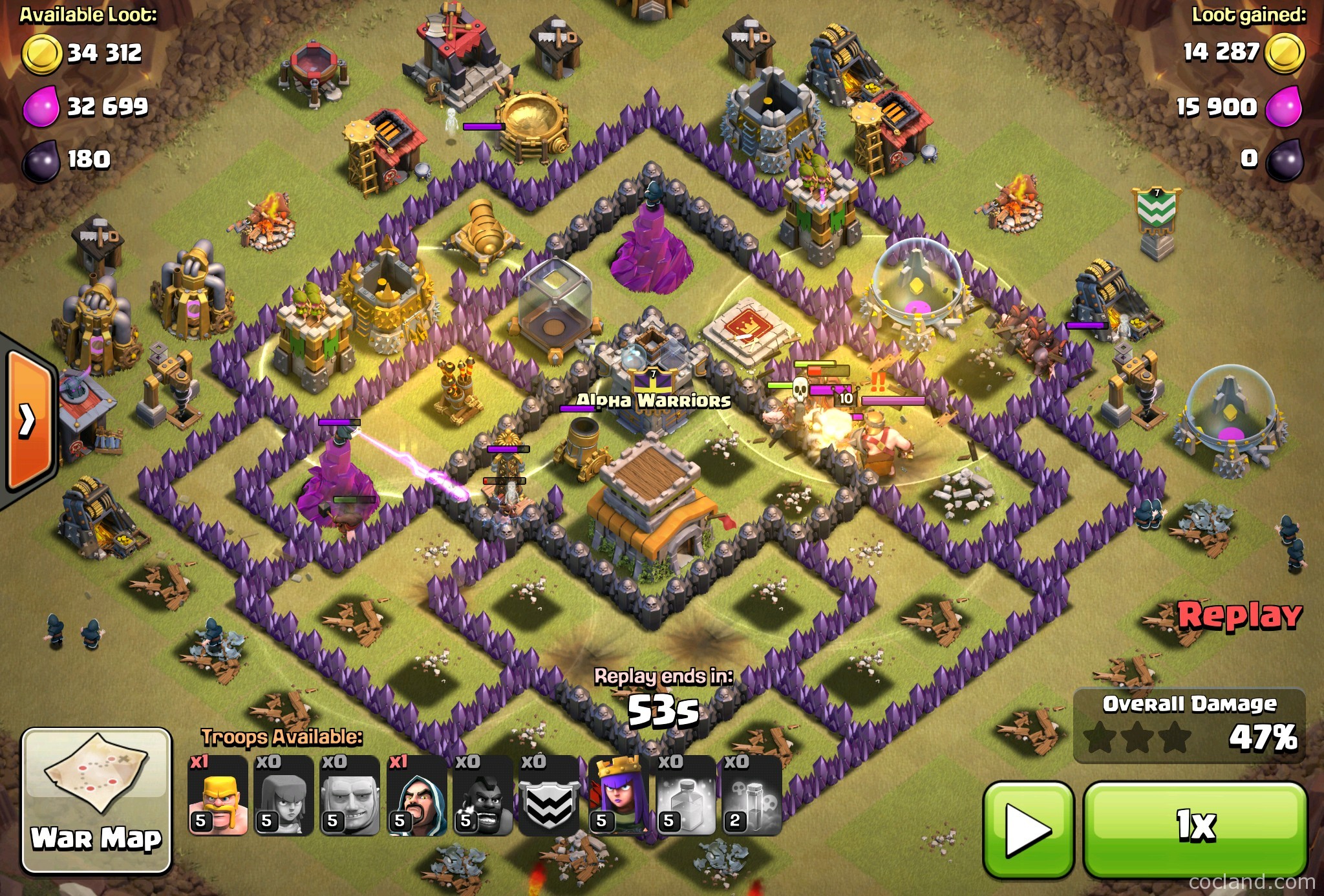 That top right spell was JUST dropped in that picture. It was either (a) too late, or (b) poorly placed. The one on the left is poorly placed. Had it been a few tiles lower, it would have been considerably more effective.

This attack ended up being a success, as the right pack of hogs took down that archer tower and headed over to stand in the other heal (which, in that picture, isn’t healing any hogs). Had this not been an attack using level 5 hogs and 4 spell capacity, the poor placement surely would have cost the raid. So, these things considered, next time you’re planning your attack, take a good look at the buildings as you’re planning your hogs and their pathing. Take a look at the building density and have a general idea of what the “map” of defenses looks like, and on your next hog attack, you should be able to place your heal without thinking of it much.

This, like most things, takes practice, and it certainly won’t keep you from panic healing. It may, however, save your raid if it can help you get that spell down quicker, so you can poison the skeletons quicker, and think about it more quickly than had you had to process the thought of where to place the heal, and then consider afterward whether or not it was a good spot, and what to do if you’ve botched it.

Hope you’ve found this helpful. Thanks Loring for this great guide!