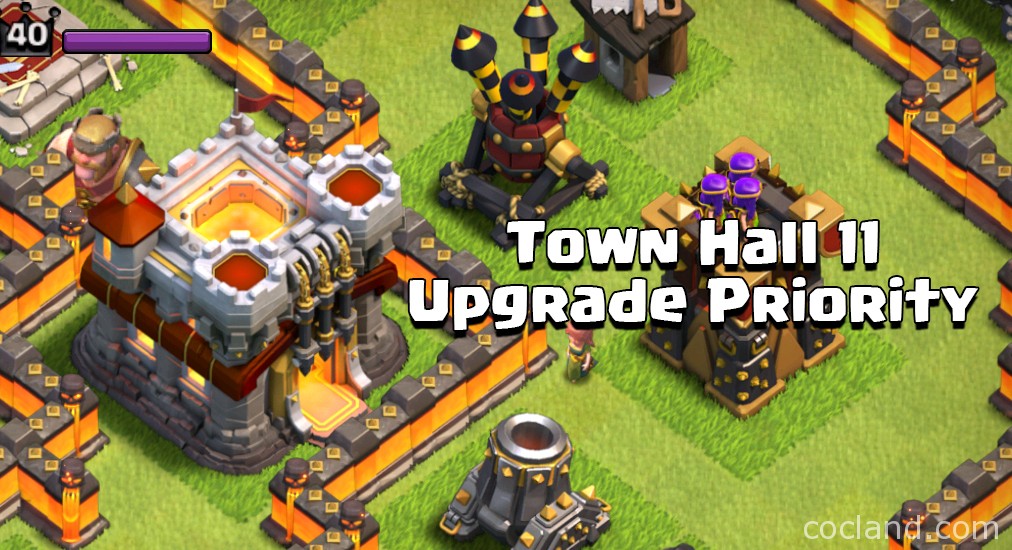 Level 1 Eagle Artillery (Optional)
The second best thing about Town Hall 11 is the Eagle Artillery. However, for war players, it comes with a price as it will substantially increase your war weight. So if you’re an active war player and want easier competition (especially since you will probably have the Grand Warden on upgrade most of the time), you may want to re-think about building the Eagle Artillery. But for those who don’t care about wars and are more focused on farming, build that Eagle Artillery. It will protect your loot better. Not only that, due to the upcoming matchmaking system, as a TH11, you will be targeted mainly by other high level players.

Before you upgrade your Laboratory, make sure you start a troop upgrade first. Why? Because the Lab will continue to upgrade that troop even if the Lab itself is inactive. I know many people are still unaware of this, but Supercell had made this change, in the dark, a few months ago. And looking at the pattern of upgrades, I would expect the Laboratory upgrade be around 7 days and cost around 6 million Elixir to upgrade.

You also get two new troop levels with the Level 9 Laboratory, level 3 Witch and level 7 Minion. Which one should I upgrade first? Well it depends on the type of player you are. If you’re focused on wars and use Witches or plan to use them, then it’s a no brainer that you upgrade them first. Level 2 mass Witches are monsters at TH10, so just think of how awesome they will be. While if you’re a farmer who doesn’t care about wars and use Minions for farming a lot, then you probably want to go with Minions first. Or if you’re a Lavaloonion trophy pusher who never uses Witches, then you would probably want to go with level 7 Minion too. As for me, I’ll be doing lv3 Witches because they will just be overall much better as lv6 Minions are fine for farming and lavaloonion anyway. I want to experience wars at TH11 with them too and will continue to farm at Titan 3 with GiWiWi, so level 3 Witches is the way to go for me.

Getting the Grand Warden is cool, but a level 1 Grand Warden is uncool. Like the Barbarian King and Archer Queen, you won’t get his ability, the Eternal Tome, until he’s level 5. The Eternal Tome is an extremely important ability, especially when he’s at level 20. As it will last a whole 5 seconds. Which doesn’t sound like much, but any experienced player understands how big of an impact the 5 seconds of godliness is.

Get all the new extra defenses at Level 1: X-bow, Wizard Tower, Archer Tower, and Cannon

Build all the extra new defenses to you can also start designing your Town Hall 11 base.

Also, make sure your Elixir Storages are maxed out as well. The Grand Warden’s upgrades will also possible surpass 8 million Elixir, so be prepared. The additional HP coverage of these high level storages also help with shielding your defenses.

If you’re building the Eagle Artillery, then continue to upgrade it to level 2 when it’s complete.

Now work on getting the extra defenses to TH9 level. Except the Cannon, he can stay at level 8 for now as he won’t have as much of an impact as the other defenses. Cannons are a liability against air attacks and are slow in ground attacks, so they’re not as important.

Next get your X-bow to level 4 as they have provide you with a very big boost of HP. Which is very important for solidifying your core. Lv8 Wizard Towers are also excellent not just against farming compositions, but also Balloons, Giants, Witches, and Wizards.

I can already see Level 9 Wizard Towers being a killer against Lavaloonion attacks (as long as you keep your Wizard Towers away from Air Defenses so Lava Hounds don’t distract you. You will also need them counter the new Lv3 Witches.

Archer Tower level 13, Cannon level 13
Lastly, get your Archer Towers maxed at level 13 and Cannons to level 13. Prioritize Archer Towers over Cannons as they are just overall better. Archer Towers shoot faster and can attack both air and ground troops and are just as powerful as Cannons. So there’s no reason why you should be maxing your Cannons before Archer Towers.

Well that will be all, hopefully this helped you guys who are planning on going to Town Hall 11. Thanks for reading!