Hey guys, Today I’m going to show you guys the 10 best ways to farm Dark Elixir, giving you guys a good explanation of each attack strategy and what makes each of them unique. Please watch my video to get a sense of how each attack is conducted.

The most efficient attack for farming Dark Elixir. What makes it so efficient? You are using all 6 barracks to train troops, meaning you will get a full army to raid with quickly. Of course Minions cost Dark Elixir to cook, but you will make so much more Dark Elixir faster by using them (to get an army quicker) that their small cost doesn’t matter. I prefer using 16 Minions, as I found that that is all you need to steal Dark Elixir from most bases. Remember, you want to use Minions last to retrieve the Dark Elixir if your Barbarians and Archers have failed. So you shouldn’t need to always use Minions every raid. You can read more about this farming strategy at here.

A very effective way of farming Dark Elixir by breaking inside the base with an Archer Queen coupled with a bunch of Healers. Not as efficient as other methods due to Healers taking a very long time to train, so this method is more for players who casually farm by logging on and off every hour or those who boost a lot. You want to carry Minions to direct your Archer Queen towards the Dark Elixir Storage, so make sure you have at least 20 Minions every raid. Read more about Super Queen strategy at here.

Masters League for the Loot Bonus, and if you have the Archer Queen, then you can use her to break into easy bases for the Dark Elixir Storages as well. Which is perhaps one of the fastest way of farming Dark Elixir. Another method with Barch is the Heal Breaker attack, which uses 16 Wall Breakers and Heal Spells. Lots of Wall Breakers to break deep inside a base while breaking all junctions, allowing your Barbarians and Archers to spread furiously inside. Couple them with Heal Spells and the splash damages will be unable to take out your Barbarians, Only thing you want to watch out for are Giant Bombs, so be careful of empty 2×2 tiles (test them first before spamming everything in).
You can find lots of tips and tricks for this strategy in this guide.

Very common and efficient method of farming Dark Elixir. I prefer using this attack with the Archer Queen as otherwise Giants won’t provide much use shielding Archers as Giants are unable to shield against Mortar splash. Whereas, the Archer Queen has an ample amount of HP, making her quite impermeable to splash damage, and so she is excellent when couple with Giants.

Same as the above attack, but this one utilizes Wizards. What’s great about this composition is that it doesn’t need an Archer Queen to be super effective. Why? Because Wizards have very good HP, allowing them to take hits from Mortars and at the same time can also be easily healed back up from the splash damages. Only setback is that Wizards take a very long time to train, so this composition is more for casual farmers or those who can boost.

Like GiBarch, but with Minions! What makes this a better option than GiBarch? It’s even more efficient as you’re utilizing all 6 barracks, allowing you to get a full army faster. Again, Minions do cost Dark Elixir, and both Giants and Minions eat up a lot of camp space, so only limit using around 8 Giants and 16 Minions.

A very effective attack for coring almost any Town Hall 9 base. Simply spam Balloons with Minions behind them and use Rage Spells. Biggest setback is that Balloons take a very long time to train and you’ll need to use a lot of Minions (and they cost Dark Elixir). This attack is most ideal for very casual players or players who boost all 4 Barracks.

A much better alternative to Balloonion, as this composition only utilizes a few Balloons (around 6 to 8). Which is all you need to quickly remove key threats such as Mortars or Wizard Towers, making it easy for your Barbarians and Archers to break in. Use a Rage Spell on your Balloons to quickly allow them to remove defenses, while also using your Wall Breakers at the same time to break into multiple layers of walls, AND with the Rage Spell send in your Barbarians and Archers to quickly get the Dark Elixir Storage. Read more about LoonBAM at here. 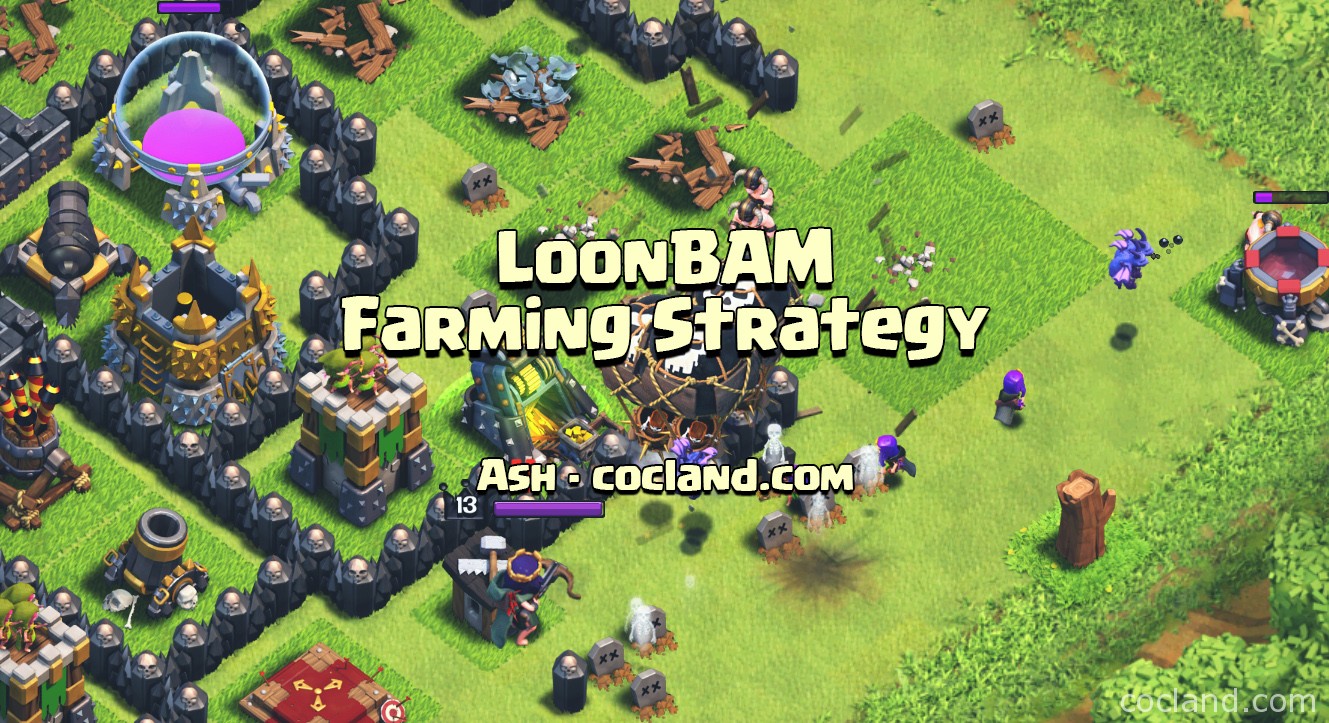 Hope you guys liked all of these different Dark Elixir farming strategies. Make sure you’ve watched my video on all of these great attacks too! If you liked my video then please subscribe to support my channel. Also, comment below and let me know what your favorite attack is for getting Dark Elixir. Thank you guys!