Master leagues are known as the best places for farming Dark Elixir in Clash of Clans. I have been at Master leagues for quite a long and using plenty of different farming strategies, both air and ground.

After months, I have found these 8 farming compositions are the best ones for me. Let’s take a look and I hope you can find a strategy suits you. With me, Barch is still the best :D. 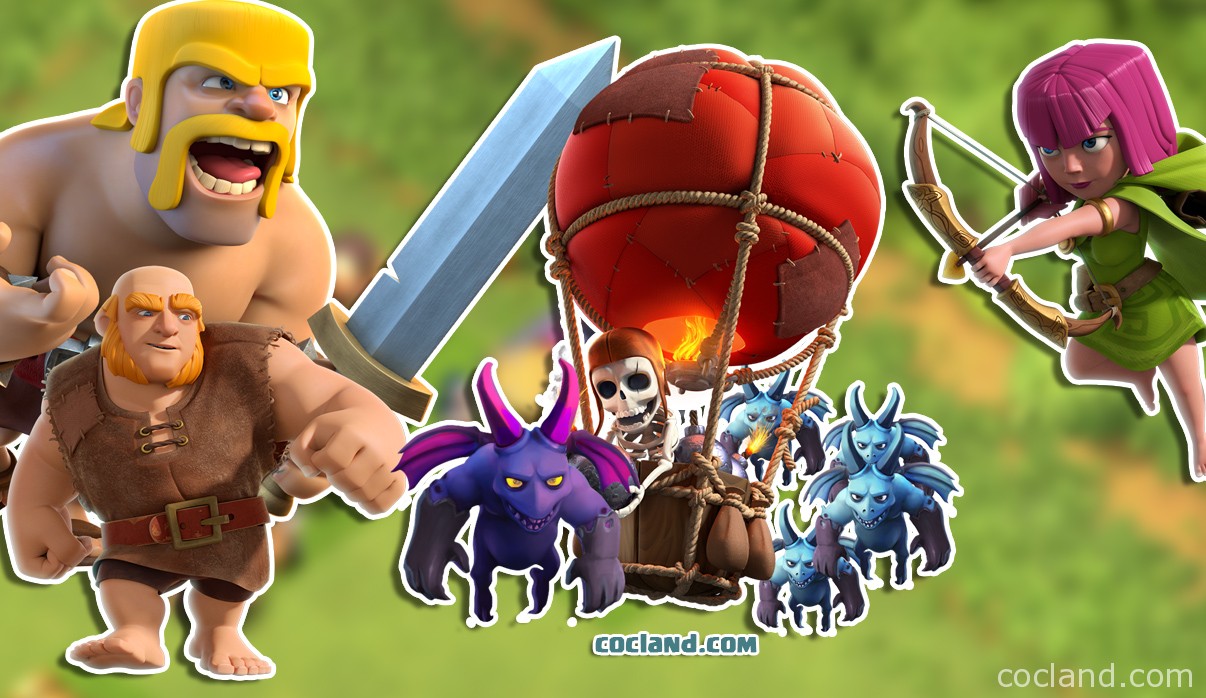 I have an individual post about classic Barch at Master on cocland. You can read more about it at: Barch at Master. With me, this composition is the best.

With a large number of Archers, we can obtain 50% easier. Barbarians will be used as th meat shields and mini Wall Breakers when you want to break inside. Deploy Minions once Archer Towers and Air Defenses nearby are down. Archer Towers with high attack speed and Wizard Towers with splash damage can take down your Minions easily. You can read more about this strategy at here.

Use each Barrack trains 1 Wall Breakers, 2 Barracks for training Barbarians, 2 other for training Archers, 16 Minions in Dark Barrack, train 1 Rage Spell, 1 Healing Spell and the rest is Lightning Spells.

Don’t use both Rage and Healing Spell If just one is enough. With these 2 spells, you can break into the Dark Elixir compartment with ease. Lightning Spells are for zapping and take some last buildings for a 50% win If necessary.

If you don’t want to spend Dark Elixir on training Minions, use this army. With this composition, I recommend you use the King with Barbarians under the Rage Spell for breaking into the enemy village easier. You will need to use Healing Spells for dealing with splash damage defensive buildings (Mortars and Wizard Towers).

4 Wall Breakers each Barrack, 2 rax for training Barbarians and 2 others with Archers. Fill up your Factory with all Healing Spells.

If you can boost your buildings and have high level Heroes, this army composition will be more effective than the others because your Heroes can maintain in the combat with full heath, they don’t need to wait for regenerating for the next raid.
Drop 2 Barbarians and 2 Archer behind then drop a couple of Wall Breakers right after them to break inside the core. You have enough Wall Breakers (16 bombs) to break inside the core of almost bases. Don’t hesitate, drop your Healing Spells whenever you have a large group of troops.

Spread 12-16 Giants and 8 Wall Breakers on all Barracks. Use 3 Barracks for training Archers and the last one is for Barbarians. Bring 1 Healing Spell, 1 Rage Spell and the rest is Lightning Spells.

With Giants’ high HP, it is not hard at all to break into the base. With this army, you always need to be ready for using the Rage Spell to break inside easier because Giant’s speed is not good. You will also need to use yours Heroes as well because this army composition gives Giants a large number of housing space and sometimes you don’t have enough damage to attack. IMO, GiBarch is worse than all others in this guide.

Each Barrack 2 Giants and 1 Wall Breakers, 3 Barrack for Archers and 1 Barrack for Barbarians, 16 Minions. You will need to bring 1 Rage Spell and the rest is all Lightning Spells.
This army composition is quite similar to the GiBarch above but with more versatility. It takes a certain time to master this army because there are plenty of involved troops and you can attack a base with different ways by using Gi-B.A.M. You should use B.A.M and GiBarch before using this one.

The point of this attack strategy is using Giants to distract defensive buildings, using Barbarians and Archers to break into the base and use Minions to remove  defenses on the way quickly while they are focusing on other troops.

Our army will have 28-30 Balloons and the rest is Minions. 2 Rage + 2 Healing Spells are recommend.
Balloonion is the best air farming army composition that I have ever used in Master leagues. I went to Champion league easily before by using Balloonion.

Because this army composition requires a certain amount of Dark Elixir for training Minions, don’t attack a base with less than 1500 DE and always attack from the side which is closest to the Dark Elixir Storage.
Don’t deploy your Balloons to fast and close together or the Wizard Towers can take them down easily. You can drop 1-2 Balloons to distract the defensive buildings first then deploy 3-4 other right after that to work on those defenses. You also need to read about the Air Sweeper. We have a guide on cocland shows you how Air Sweeper works.

Once Wizard Towers nearby are all out, it’s Minions’ playtime!

Do you have any other strategies that you find effective while farming at Master leagues?