This Attacking Basics Guide will show you couples of basic attack strategies guide for each Town Hall level. If you have any questions or great ideas, feel free to do a comment! Let’s do this guide more and more better!
This guide is from FlyAutumn on Clash of Clans forum. I have decided to post it here with his permission cause I found it useful. Perfect guide for newbies!

Before upgrading your Town Hall and doing attack, you should read the guide Things should do after upgrading Town Hall first. 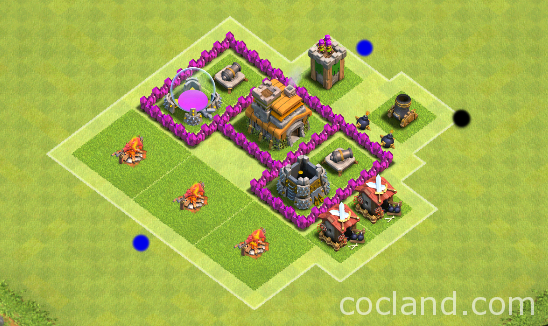 60% of barbarians and 40% of archers is the best army composition in these levels ’cause they are cheap army to produce, so you can have elixir for upgrades.

There are two options of army composition for this level of Town Hall (80 housing places for example):

I recommend using the second option if you are new TH4 and have not upgraded your camps yet. 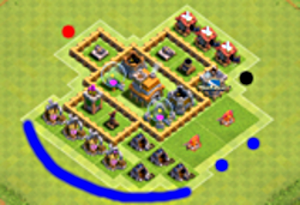 Using Giants and Wall Breakers
The difference between attacking as a TH 4 versus a TH 2 or 3 is that you have more housing space. This means… giants and wall breakers! Now, you might be wondering: why shouldn’t I use giants and wall breakers as a TH 3? Well, you do UNLOCK them at TH 3, but that doesn’t mean you should use them. A good army usually has a good amount of barbarians and archers to form the second and third waves of attack, and if you use the giants then, you have to sacrifice the number of barbarians and archer that you use.

How to Deploy Giants and Wall Breakers (First Wave)
I recommend using giants and wall breakers as part of your first wave. Giants specifically target defenses, and you should deploy them near a mortar if it is near the outside of the base. But wait! What if the mortar is enclosed by walls? Then what? Well, that’s where the wall breakers come in. The process:

WHY?
The giants serve as a “shield” for the wall breakers. Since the defenses will target the closest troop, your giants will take the fire (it’s okay, they have high hit points).

Deploying Barbarians and Archers (Second and Third Waves)
Now that the mortar and/or some other defenses have been (hopefully) taken care of, you can deploy your archers and barbarians.

Clan Castle Troops: How To Deal With Them

So how about them clan castle troops?
Sometimes when you’re attacking, you come across troops in the clan castle that defend your enemy’s village. The troops often come out and wreak havoc on your army – oh no! Here’s how to combat that:

Assumes that you have 135 housing spaces: 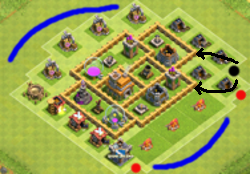 Spells:
At TH 5, you unlock the lightning spell. My thoughts on it: I’m not really a huge fan, unless it involves zapping clan castle troops because It cost a bit of elixir, and it doesn’t really do enough damage to be “worth it” for me.
I do know that some people really like to use lightning spells, especially at lower levels. If you use them, I recommend saving them for clan wars. They help to give that little bit of extra damage you need to get more stars on an attack.

Assumes that you have 150 housing spaces:

Healing Spell is optional but I strong recommend you to use it whenever you attack find a well-loot village. The second option is better in Clan Wars. I always use the option 1 in normal raiding because it costs not much elixir for training troops. 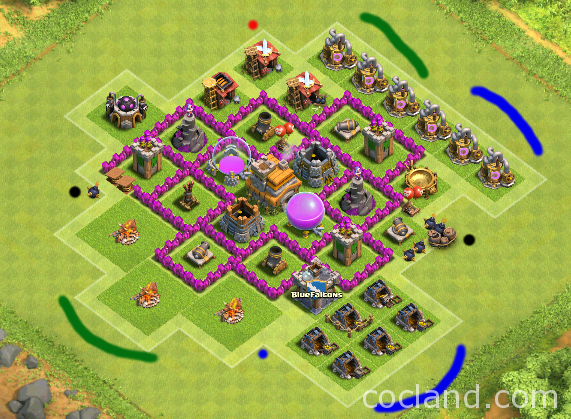 Btw, to have a good base town hall, I think this guide is useful with you: Making a better Clash of Clans Base.