Hello guys today I am going to give you a new Clash Clash of Clans strategy for Town Hall 8 which is called GoVaHo, which uses Golems, Valkyries and Hogs as the main troops. 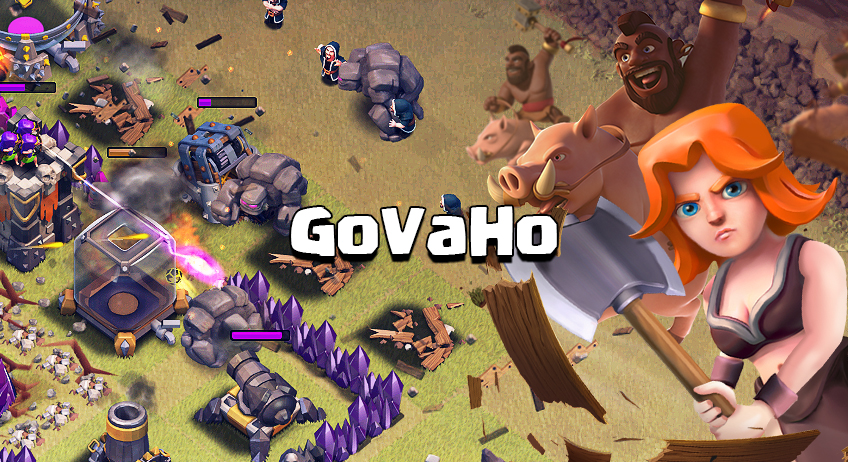 As we all know, Valkyries got a great boost in the last Clash of Clans update. They have better damage now and start attacking much faster after locking on the targets. Valkyrie strategies are definitely of of the most powerful attacks at Town Hall 8 and above. People even have been using them a lot in Town Hall 11 for 3 star strategies. Moreover, using them is pretty funny. I always love watching they spinning in the battle.

I usually use these spell combinations with GoVaHo:

I saw couples of players using 4 Healing Spells while attacking with GoVaHo but it’s just not worth it. You don’t need up to 4 Healing Spells to cover your troops and without Poison Spell, dealing with Clan troops and Skeleton traps are much harder! You will want to use at least 1 Healing Spell for your Valkyries when they are getting into the core. Be careful and watch their directions. You will want to cover as many troops as possible. Don’t drop the Healing spell too late or too early. As your main army can destroy the core in seconds so just drop it once they are getting into the core.

How many Valkyries should I use?

You should care about the number of Hogs you are going to use, not the number of Valkyries. I usually use 10-15 Hog Riders and 6-8 Valkyries. You may want to spend 2-3 Hogs for each defensive building in the outer ring.

What Clan Castle troops should I use?

You should focus on upgrading your Golems and Valkyries first If you want to use GoVaHo. Of course don’t forget to upgrading your Hogs as well. Hogs level 2 are very weak. You can use Hogs level 3 with GoVaHo as this strategy doesn’t require many Hogs as Mass Hogs or HoGo requires.

The main idea of this strategy?

The Earthquake Spell will be used to open as many compartments as possible so your Kill Squad can go in and destroy everything over there. If the base you are going to attack has move than 3 layers, you properly should use your Wall Breakers to open the first layer. Opening inner layers with WBs is extremely hard but you can easily finish that job with Earthquake Spells.

One of the most dangerous threats you need to care about while using Wall Breakers is splash damage. Pay attention to splash damaging towers, especially Mortar. You will get a lot of trophies If you can’t spend your WBs properly. Note: Wall Breakers don’t target empty compartments nearby.

When should I use GoVaHo? Why not GoVaLo?

You probably want to use Hog Riders If Air Defenes are not placed in the core. Vice versa, If you can easily destroy all Ads in the core, go with GoVaLo.

If the Air Sweeper is the main problem, use Hogs. We all don’t want to run Balloons in Air Sweeper’s direction. If there are a lot of open spaces in the core, maybe there are Giant Bombs there. That’s great If you can also trigger Giant Bombs with your Kill Squad, which helps you using Hogs much easier later.

Where should I start attacking?

You may want to start attacking from where you can trigger as many Giant Bombs as possible. That’s great If you can also get the Barbarian King.

Should I lure Clan troops?

With this strategy, yes. Since your Golems, Valkyries and Barbarian King can’t target air units and it may take a while for your Wizards to target Clan troops. If you can’t lure them out with 1 Hogs, you 2-3 Hogs to lure them out and take down 1 defensive building at the same time. If the base you are going to attack is unlurable, you may probably want to invest more Wizards for your Kill Squad.

Let’s take a look at the sample attack below. Gadi did successful attack against a Town Hall 8.5 with GoVaHo strategy!

Okay guys thank you very much for reading! I hope you will like this GoVaHo strategy! I am still working on this guide and will add more tips and tricks for you soon! Stay tuned my friends!