Because of the low level troops and Heroes, finding a decent army composition for getting 3 stars in Clan War at early Town Hall 9 is not easy at all. Using Mass Hog Rider is not a bad choice but we can’t use it on all bases. Lots of new TH9 players are using GoWiPe for Clan Wars but with low level Golem and Heroes, getting the last start is pretty touch. You also can’t use air attacks at the early stage. So what is the best and easiest way to get 3 stars from most bases as an early Town Hall 9? I’d like to say it is HoGoWiWi.

Depending on the base you are going to attack, you can adjust the army composition yourself. Below is the one that I usually use:

There are 2 things you should care about before doing the attack: The enemy Clan Castle and Archer Queen. We should attack from the Archer Queen’s side otherwise she will hurt your troops so bad. She is always one of the most dangerous threats for all Hog Rider variants.

Regardless of the Clan Castle placement, you always can lure the Clan troops out:

After that, pull those troops to the corner by using your Archer. When they are close enough, drop your 2 Witches at the corner for calling Skeletons and taking damage. Drop the Poison Spell and then your Archer Queen for dealing with those Clan troops. If your Skeletons are taken down quickly, you should drop 2 Barbarians for replacing them. When your Barbarians are taking damage, the Witches will have time for re-calling those Skeletons again.

You should drop your Golems when dealing with the Clan troops to avoid wasting time. As we’ve discussed above, let’s attack from the Archer Queen’s side.

Just drop your Golems as usual. Don’t place them too close, spread them out a bit so they can distract more defensive buildings. Drop your Wizards right after your Golems, normally 4-5 Wizards are enough.

You should send your Wall Breakers to open a pretty big compartment, so you can reach the core easier later with just 1 Jump Spell. Send your Barbarian King into the War once the walls are down. Without buildings outside, your King will come directly inside the base. If you are not really good at this, you should take a look at the example for funneling your Heroes. 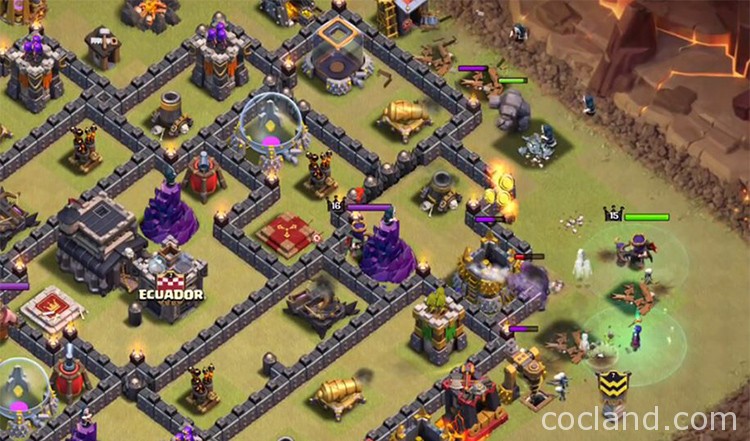 Once your Golems and Heroes are get into the core, you can start deploying your Hog Riders at the opposite side. Deploy 3-4 Hog Riders for each defensive buildings (this is called Surgical Hogs Strategy) for minimizing the loss If they face the Spring Traps or Giant Bombs. Focus on the attack and drop the Healing Spells once their healthbars turn to yellow.

Don’t forget your unused Wizards. Deploy them once the Hog Riders have taken down the defensive buildings nearby.

Due to the number of troops, You may think this HoGoWiWi is a bit hard to do but no, it is totally not hard. In short, this attack strategy can be split into just 2 parts: Dropping Golems and Sending Hog Riders. No one can do it well at the first time. Practicing makes perfect! Doing the attacks outside the War couples of times and I am sure that you will love this strategy!