In Episode One we focused on different Lava Hound orientated attacks and touched upon LoGoWiWI and the strategy behind back-end loons. Episode two will take a closer look at the LoGoWiWI whilst primarily focusing on its brother strategy the HoGoWiWi. 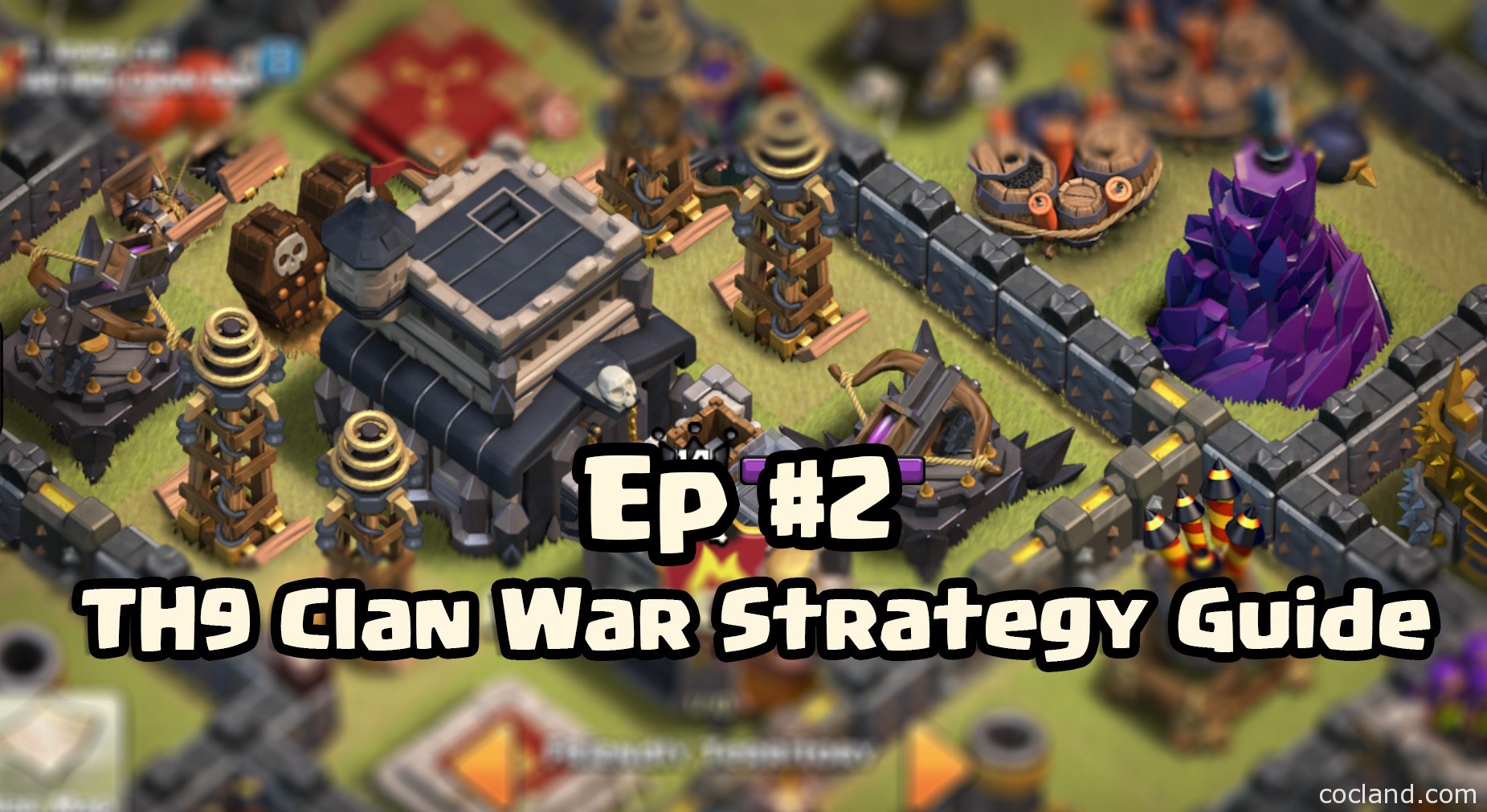 No Town Hall 9 strategy guide for Clan War would be complete without a good look at HoGoWiWi. It’s a very similar strategy to LoGoWiWI but with added benefits that can make it a deadly composition. Firstly, hogs are much faster than loons and can apply the necessary damage to defences much faster. Secondly, double giant bombs are predictable and you can steer your hogs around them if you haven’t already set them off with your GoWiWI. In contrast, anti-Loon air traps can be anywhere around the base and can cause significant damage to your raid. Combined, these attributes make for a powerful attack.

Of course, there are draw backs – typically you will need more hogs than loons. In the video below we will see that the HoGoWiWis have as many as 22 hogs per attack whilst the LoGoWiWI only has 10 loons freeing up space for more GoWiWI troops such as witches and wizards. It is also important to take notice of the value of heroes in all of these attacks. Both do huge amounts of damage in the shadow of the GoWiWI and are essential to a successful raid. The attacks in Episode Two are as follows:

HoGoWiWi strategy consists of using a large amount of hogs, usually around twenty, to back up a GoWiWI attack. The hogs are spread around the opposite sides of the base from where the GoWiWI was originally launched and usually are released once the GoWiWI has approached the middle.

Much like a LoGoWiWI, the HoGoWiWi begins with the release of the GoWiWI using a couple of Golems to tank several wizards and one or two witches. Once the outer buildings have been cleared and a path made, Heroes are released and, with the aid of a rage, help to take out the enemy CC if not already lured. Usually a jump is then employed to take remaining units and heroes into the centre of the base giving the signal for the hogs to be released on the opposite sides.

The image below shows the importance of clearing surrounding buildings with the wizards before releasing your heroes, to ensure that they go towards the centre. The red crosses mark where buildings have been cleared, making way for the heroes to go in the direction of the yellow arrow: 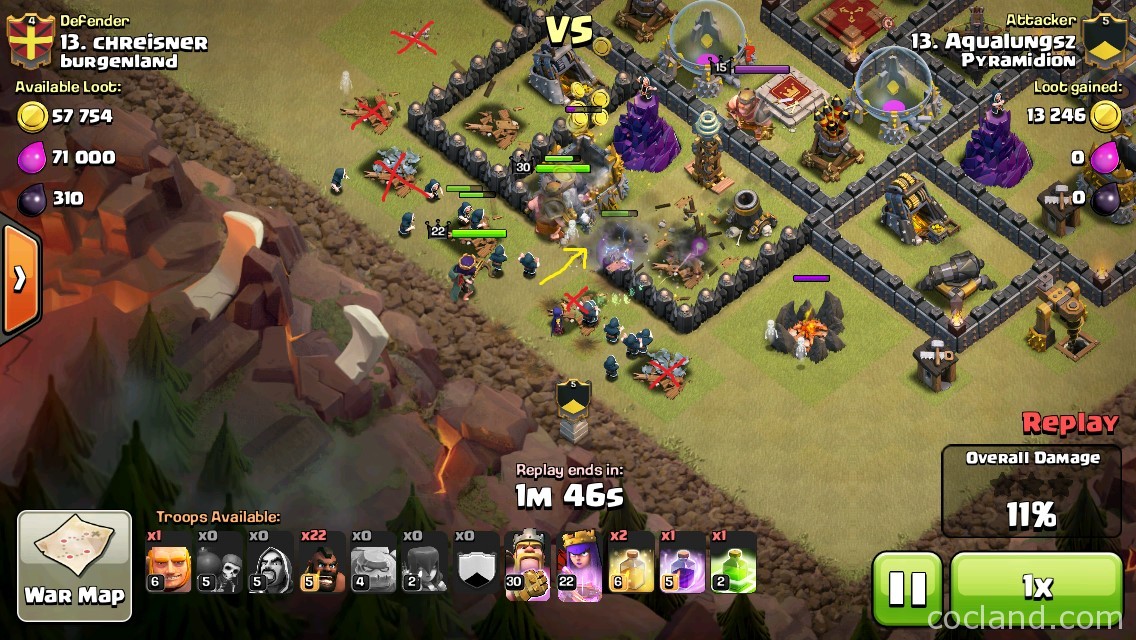 The next important thing is the positioning and placement of the hogs. You want to make sure they aren’t all clumped together to begin with just in case there is a rogue giant bomb. Instead, release them in twos and threes per each defence and spread them round a decent arc of the base, making sure not to spread them too thinly. You’ll most likely have a couple of heal spells and you’ll want to use these once the hogs come close together towards the centre to top up their health. Don’t panic and miss-place the heal spells as this could be costly.

In the image below you can see the angles the hogs have been released at through the red arrows in conjunction with the initial GoWiWI which is released by the yellow arrow: 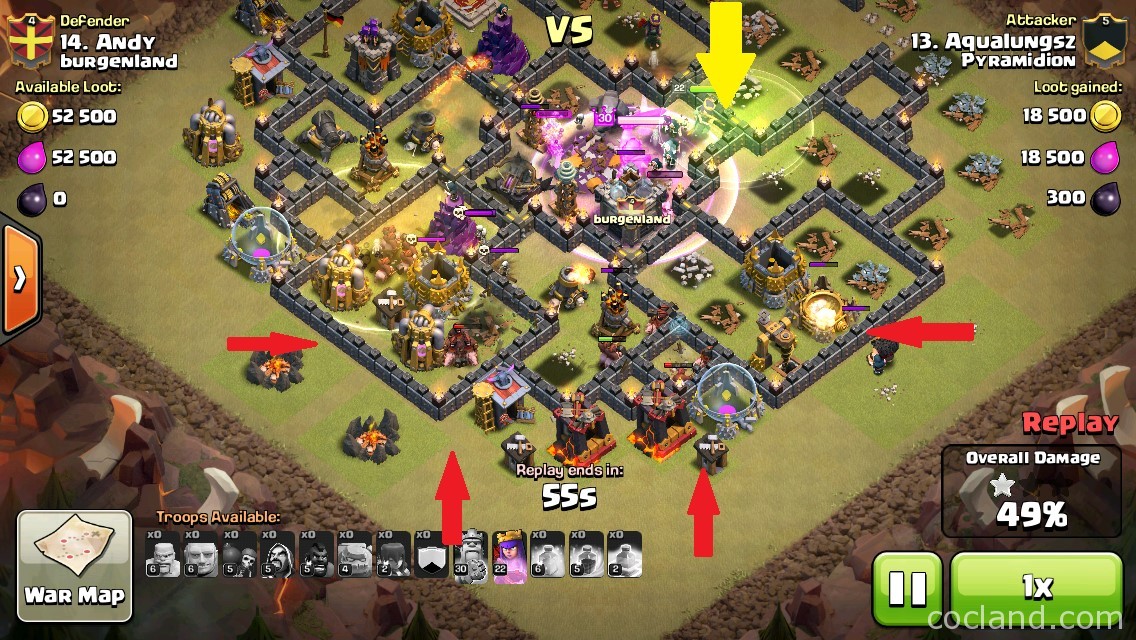 With all of these strategies brought together, you should be able to HoGoWiWi the vast majority of TH9 bases – although there will be occasions where LoGoWiWI is the better option and this normally occurs when there are several possible DGB spaces around the base. For more strategy regarding HoGoWiWi you can watch the below video:

Building upon Episode One’s LoGoWiWi guide we can look at an important factor in determining the success of the LoGoWiWi which is the guidance of the GoWiWI and heroes into the centre of the base in order to destroy the air defences.

More so than with hogs, the attacker needs to be patient with loons to ensure the right defences are down before launching the back-end attack. ADs can decimate loons extremely quickly, so ideally the attacker will have as many of them down, if not all, before launching his loons. The below picture illustrates how that was down in the Episode Two attack and shows just how important it is to get a few wizards and the heroes through to that centre ground.

The red circles mark the anti-air defence buildings and at this stage most of them are down. You can see, in the yellow circles a wizard and the Archer Queen taking down the final air defence just before the loons are launched. It’s important not to waste time in these attacks so you want to be releasing your loons as that last air defence goes down and perhaps even slightly before if a few of the defences are out of range. As the video shows, once this has been achieved, the loons make extremely quick work of the remaining defences and wrap up the engagement neatly. For further illustrations on how to launch successful LoGoWiWi attacks please see the video below:

That just about concludes Episode Two of the TH9 Clan War Strategy Guide. My name is Chucky and I’ll be writing up all the episodes in this series exclusively for cocland.com. Any and all support you guys can provide is seriously appreciated and makes the creation of these videos and guides worth the hard work. Hopefully you’ll be back for Episode Three which will be released shortly but in the meantime, to ensure you don’t miss out on any content, please do SUBSCRIBE to my channel by clicking the button below. Thanks and I’ll see you all next time.