Every single GoHo attack is prefaced by analyzing the target base, determining if it is suitable for GoHo (almost any base can be GoHo’d with proper planning, but sometimes a base is just begging to be hit with a different strategy), predicting Bomb and Tesla locations, and finally choosing an entry point. Thanks Ry_Guy for sharing this! 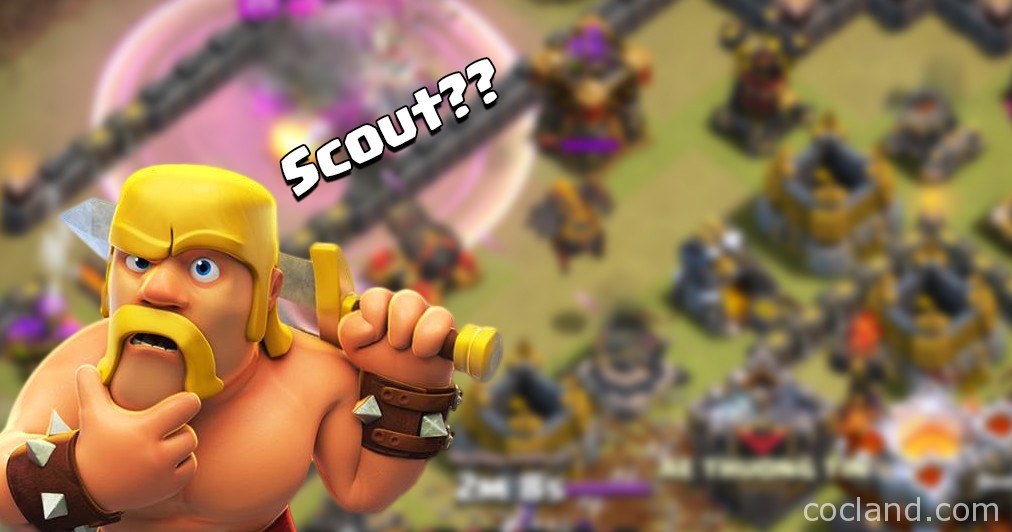 Sometimes, part of this job is already done for you if the base has been scouted by a prior attack – thank your clanmate(s) and use the information from that scout to thoroughly smash the base. Otherwise, this is how you should begin breaking down your target.

The number one threat to hogs (and thus, a GoHo attack) is Giant Bombs (GBs), specifically double GBs (DGBs). So, needless to say, neutralizing (“tripping”) or avoiding them is paramount in a GoHo attack. Smart base designers will typically place GBs or DGBs in a more protected, interior area of the base, so they cannot be tripped with “probe” hogs, and place them away from the defensive Archer Queen (DAQ), so they cannot be easily tripped with the Kill Squad. They will (should) always be between two defenses, since hogs will always path from one defense to the next due to their defense-led AI. Obviously, bases with very few 2×4 tile spaces (potential DGBs) in them are very appealing for hogging, but single GBs should not be overlooked. Single GBs will not kill a pack of hogs outright the way a DGB will, but they will put them at dangerously low HP. So, single GB locations will typically need to be healed. Sometimes, sly base designers will use this to their advantage and place single GBs in unexpected locations in the base, essentially forcing the attacker to dump a heal spell before they had planned to. Just be wary of this and remember: the more GBs you trip with your Kill Squad, the less danger your hogs will be in.

Teslas are not as significant a threat as DGBs, but they are the single most powerful point defense and they carry the extra element of surprise. A single Tesla usually will not pose a lethal threat to hogs, but a group of Teslas, untanked, will shred them (sometimes even under heal). So, knowing or accurately predicting where they are, and getting your Kill Squad to either take some out OR tank them so your hogs don’t have to is a massive advantage. Just like with GBs, sometimes base designers will place Teslas in seemingly unconventional places to either divert Golems from their intended target, force the attacker to “panic drop” a heal before they had planned to, or surprise the attacker with a “Tesla farm” (3+ Teslas clustered in a bizarre location) to cripple a Kill Squad or group of hogs.

Once you have either predicted or scouted the location of GBs and Teslas, it’s time to pick a point of entry to the base. This entry point is where your Kill Squad will crack through the outer layer of the base, drive toward the core, eliminate the clan castle (CC), take out the DAQ, hopefully tank some defenses, and ultimately create a “wedge” of destroyed base for your hogs to path around and seal the victory. Does that sound like an awful lot of responsibility and a lot to accomplish? Well it should, because it is. The Kill Squad is probably the most vital component of a three-star GoHo on a “high level” base. At TH8, it is usually easy enough to just kill the CC and spam hogs for the win. Once, you graduate to higher level TH9+ hogging, however, the Kill Squad presents a whole new level of planning.

The point at which your Kill Squad will enter the base is often a very tricky decision to make, especially on a fresh hit (a first, un-scouted attack). You want to make sure to kill the DAQ… and you also would like to trip some GBs… but the base designer probably placed those GBs away from the DAQ… don’t forget that where and when the CC starts pouring out on you is important to consider too… oh and by the way it would be nice to have some of the Kill Squad still breathing in the core to do some tanking and take out some additional defenses… It’s a lot to handle and plan for. So, start by simply looking at the base and deciding if the base designer seems to have a good handle on the fundamentals of a GoHo attack and, therefore, what can stop it. For example, if the base has a town hall or DAQ offset from the center in a seemingly very accessible location… listen to the Admiral Ackbar in your head: it’s a trap. 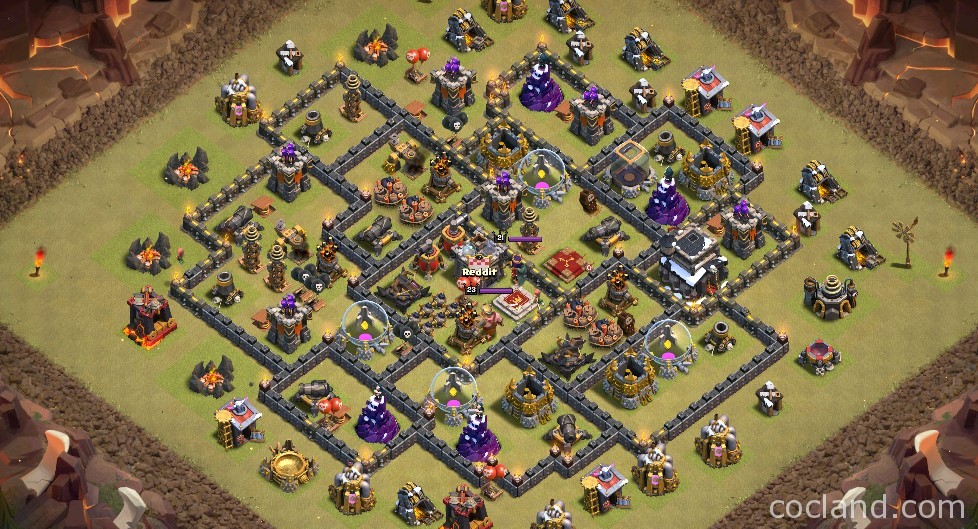 This base designer WANTS you to enter the base with your Kill Squad from the east side, because they have probably loaded all sorts of GBs and dangerous defenses on the opposite side of the base to destroy your hogs and hold you to one or two stars. Remember, a lot of the time in wars, it is preventing the three-star that matters – many base designers will happily give up the town hall if it makes the rest of the base exceptionally more difficult to clear.

If the base designer seems smart, try to outsmart him by entering the base in a location that gets you the absolute most bang for your buck. The Kill Squad is really all about efficient use of troop space (more on that later). You want to accomplish as many of the Kill Squad’s goals as possible as efficiently as possible. Sometimes, if the base designer isn’t too clever, you can accomplish a whole lot of those goals with minimal effort and troop space (those bases are a breeze). Other times, if the base is more challenging, you might need to really beef up your Kill Squad and put in more planning time to accomplish what you want to. As always, it’s all about planning the attack intelligently, eliminating as many of the hog deterrents as you can, and trying to minimize the number of surprises you might encounter.

Predicting the Wedge and Heals

The “wedge” is the area of the base that you predict (or hope) your Kill Squad will destroy during the raid. The wedge is important because, naturally, the hogs will only need to path around the wedge as they move through the base. Why does that matter you might ask? Well, knowing where the hogs will go (aren’t defense-led troops wonderful?!) means you can more accurately predict where you will need to heal them. Below is a rather rudimentary diagram of how the wedge and heals might be planned out for a given base. 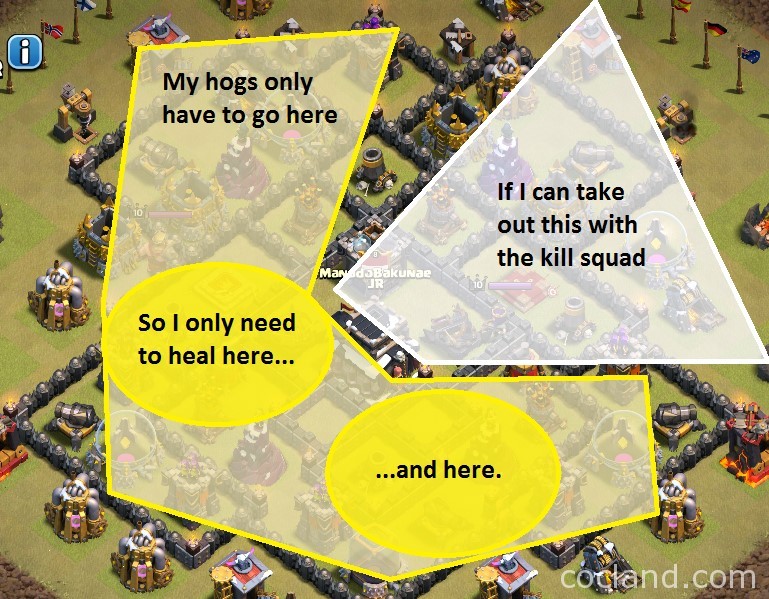 The wedge is really the best example of how the two main facets of a GoHo attack – the Kill Squad and the hogs – work in tandem. A heavier Kill Squad with more troops and spells devoted to it will create a larger wedge, which leaves less “work” for your hogs to do and, in turn, less support they will require. Alternatively, a lighter Kill Squad with less troops and spells devoted to it will create a smaller wedge, meaning your hogs will require much more support. Which approach you take is up to you, the attacker, as you break down the base and design your Kill Squad.