Hello everybody, its Ultimit☆Cuest here, and I have some new base designs that I want to share with you guys for Town Hall 8, in cooperation with the recent updates. I call this one Mario Pipes because a. I love Mario and b. like the pipes in Mario, it takes troops from one place and sends them to another place.

Because the main attack strategy at Town Hall 8 is Giants, and that my walls are hopelessly low level, I created this base with those two concepts in mind. Also, this base is meant to protect your Dark Elixir Storage, and can also semi-protect your other Storages.

Don’t mind the level of buildings. I’m new and my yes, my walls are bad. I’m trying (but I rather max my splash damage). 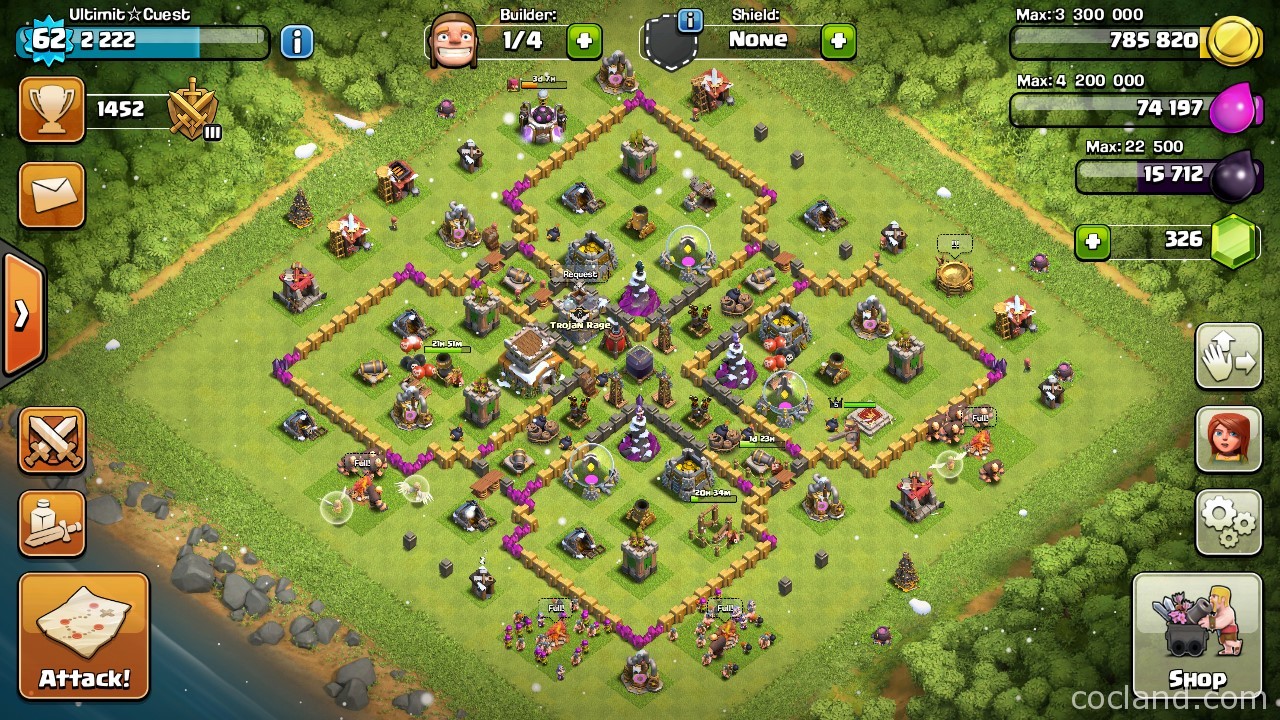 In this section, I will highlight some of the matters from the Pros, but will go into much more detail. Keep in mind that these are all hypothesis, I have not tested out what would actually happen in many of these attacks.

Barch : They will easily take your pumps. And even the drills. However, they cannot touch the Storages, for all the splash damage and assisting cannons.

BAM : Like Barch, but I think they could get a little further on the Storages. But the double air defense would take out the minions fast.

Giants : They’d be lured into the core. There, they will go in, then come out on the exit to the right or left of them. This ensures that the pocket is still intact, so it can defend the dark.

Giants & Wall Breakers : The Wall Breakers will in most points be attracted the the tip, allowing the Giants to come in. However, further wallbreakers will, instead of going to the wall next to the wizard tower/town hall, they will go toward the walls of the mines. And because there was an entrance there in the first place, it did little to nothing, except walk the Giants right into the core, where, as before, they will walk around then come back out! By then, of course, the Giants should be dead, but if not, it should be quick because of the mortar and Archer Tower!

Hog Riders : Close to terrible. Although the base is very spaced out, you could put a heal right in the middle (granting invincibility to troops destroying your core defenses) and easily wipe out this base. However, in turning it into a war base, I might put some double Giant bomb and Giant and little bomb combinations in it to defeat a hog attack.

Dragons : I think that Dragons can certainly take out a significant part of this base, I don’t believe it can do a three star. While the Dragons hit the Storages and town hall, the air defense can take them out.

Holo : Might be a problem. Archer towers and mortars are not covered by air defense, and the Archer Towers can be taken out quickly, so they can hit the mortars unfazed. I think they could do that to the north, east, and south, then send in their hogs from the west to clear a path for the town hall and take out defenses. Now that I’m actually thinking about what a nuisance hogs will be, I think I could put a double Giant bomb at the town hall, fixing this issue. 😀

GoWiPe : It will get far in the begging, but will get wrecked near the end. Troop funneling will eventually go back to the Giants, except when the golems make their way out, and turn to the next section, the pekkas will go out and start hitting the perimeter buildings! ^.^ If they survive, they will go back in another way, get hammered on, then go back out! :3 The golems will perish and so will the pekkas. They most likely will get 50%, and probably the Town Hall, but will most CERTAINLY not get 100%!

Valkyries : There are almost no buildings put close together, rendering their ability useless. Plus, they will eventually follow the Giant path throwing them around and around.

Balloons : They will probably go for the Archer Tower in one of the pockets, get grouped up, go for the mortar, get even more grouped up, the go toward my wizard towers and air defense and teslas, in a nice, neat ball. I think we can all infer what would happen, even if they use all their spells on that one spot.

What league should I use this layout with?


I’m used to be in Silver 1, for my raiding strategy, BAM. But I think it would be about the same, maybe a little easier, to be in higher leagues. I think that the best place would be gold or crystal, because there are not too many people using Barch. With Barch, you could expend your troops all over, meaning that they can steal more gold and Elixir than other raids (however, of course, will not touch the dark Storage). And besides, with Barch, people don’t get the dark, making this base pointless. You want people using mediocre to strong attacks for this base to work. If people use quick, cheap armies, you are in the wrong league. Analyzing all this, I’m realizing that I seriously need to get myself up to gold 2, at least. I recommend all you reading this do the same. 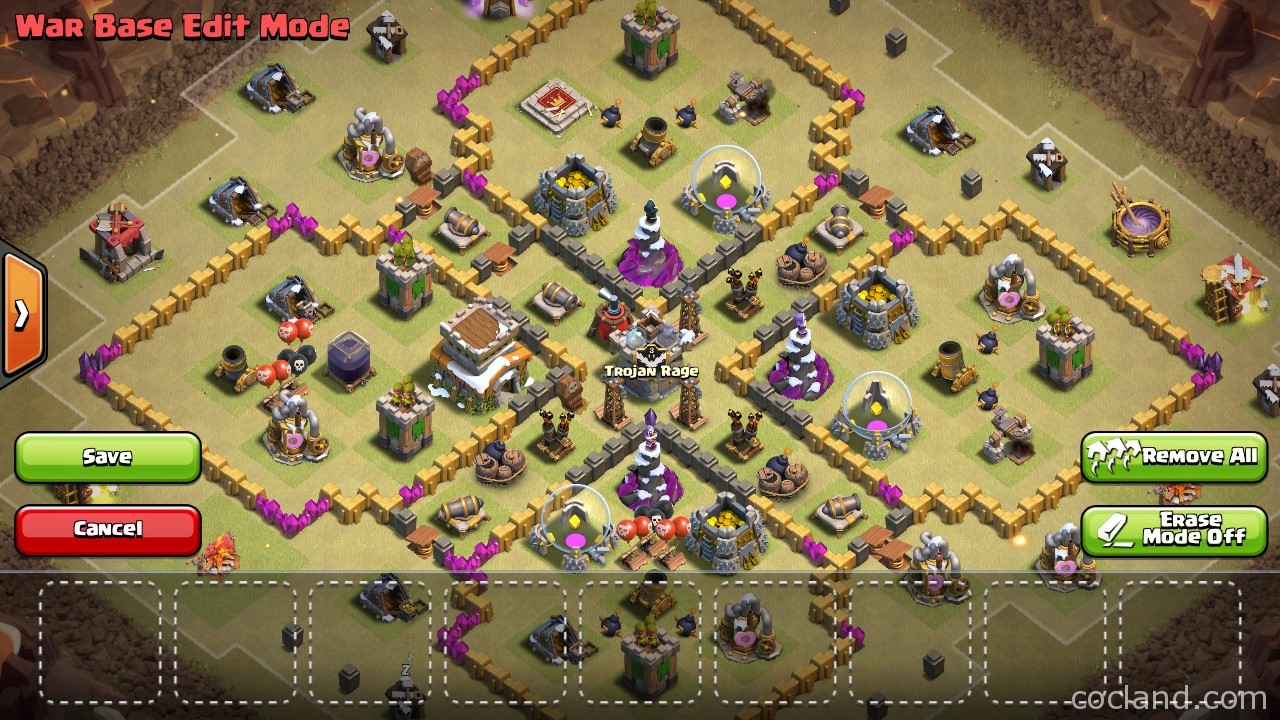 Well! That’s all of my rambling. If you guys could tell me how to record your screen (no root) on an Android, please tell me! I will gladly make a video of several of my defenses. But in the meantime, can you post your defense logs and replays. 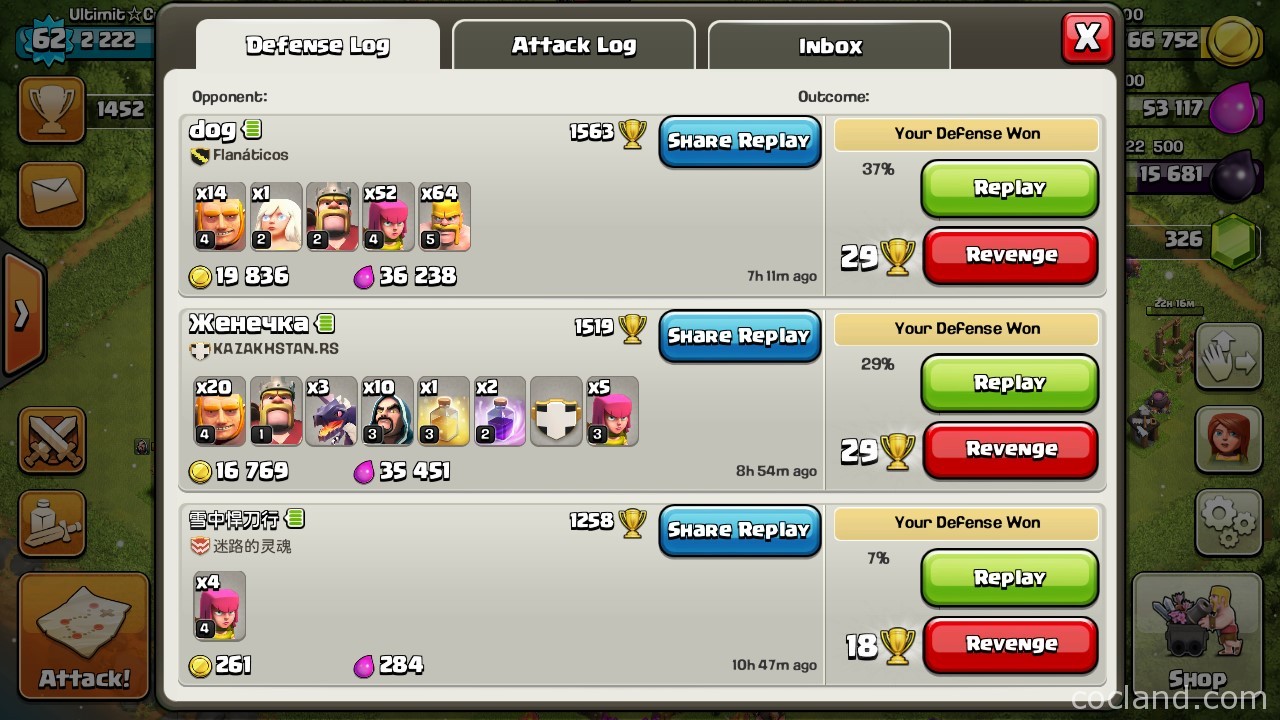 This is my first time describing the logic behind my bases, as they are quite complex. (lol now that I’m explaining them, I’m realizing the true potential of this base! You will hear from me a lot now…) If you have any comments, please post below, I appreciate criticism.