Welcome everyone! My name is Ash and I will be documenting my journey to max Town Hall 11 here. This series should be invaluable to every player because you’re either going to be a Town Hall 11 player one day in the future or you’re already a Town Hall 10 player and are considering moving to Town Hall 11. So you can learn from my approach to this game, my farming methods, my attack strategies, how I prioritize my upgrades, basically my whole approach to Town Hall 11.

My gameplay progress will also be recorded through video and I will also provide commentary. It is recommend that you watch my videos to follow my upgrades, attack strategies, and other methods. Most things will be summarized in the videos, while I go greater in depth in my written journal entries here. 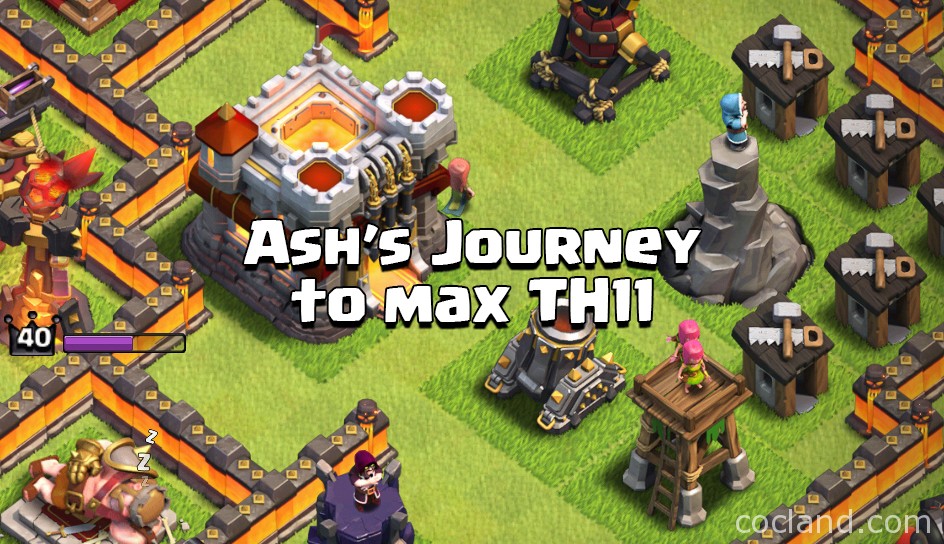 Will gems be used?

Priority = Get the Grand Warden and focus mainly on Elixir for farming to upgrade him. Why Elixir and the Grand Warden? Because the whole offense at TH11 revolves around the Grand Warden. So far from my experiences of using the Grand Warden, I’m not too thrilled. I still find the Barbarian King and Archer Queen to be better, but maybe because they are level 40 and I have yet to get level 20 Grand Warden. Anyways, the game also revolves around offense and the Grand Warden is the toughest thing to upgrade at Town Hall 11 because he has 20 levels of upgrade. If you upgrade him constantly every time his upgrade completes, then it will take you a total of 87.5 days to get him to level 20. Which isn’t as bad as the level 40 Barbarian King and Queen that take like around 8 months.
While I’m farming for the Grand Warden, I will also be starting the Eagle Artillery and new extra defenses (X-bow, Wizard Tower, Archer Tower, Cannon). I won’t be be focusing too much on them, and will probably leave them until I have my Gold and Elixir Storages and Laboratory upgraded. Laboratory will definitely be at the top of my priority as soon as I get the Warden to level 5 (which I will today). As I also want level 3 Witches as soon as possible to utilize them for 3 starring Town Hall 10s! Elixir Storages will also need to be maxed at level 12 so I can continue to upgrade the Grand Warden asap when he surpasses level 15. While the Eagle Artillery finishes in 12 days and I’ll need 10 million Gold capacity to upgrade it to level 2.

Yes, I’m aware of that. But I really don’t care about that. I know that means that wars will be more challenging as I’ll be paired up against stronger bases. But, I’m completely fine with that. I love challenges and I’m a very competitive player. So I’m up for that challenge. I’m also a base designer. I design a lot of bases, and would love to make a lot of bases for TH11 players in the future.

The loot is horrible here! Makes Town Hall 10 farming look like a joke. But I love that. Why? Because for me, it doesn’t matter if the loot is so bad as I’ve basically maxed out everything at TH10 and also completed 95% of my level 11 walls. Not only that, there’s really not much to upgrade at Town Hall 11. There are no level 12 walls. And of course I’ve completed farming my BK and AQ to level 40, so Dark Elixir is also pretty much useless for me. Once I’m done upgrading the Eagle Artillery and rest of my level 11 walls, Gold will also become useless to me. So strangely, Elixir will become the most valuable resource to me (and I neglected elixir for so long in the game haha).

This depends on how driven you are and if you’re a competitive player like me. If you’re a hardcore player who can upgrade both the Barbarian King and Archer Queen at once, then… Grand Warden to level 20 takes 87.5 days total. 87.5 divided by 7 is around 13 weeks. This means that you 20 levels of the Warden is equivalent to about 13 levels of your Barbarian King or Archer Queen after they surpass level 15. So plan wisely. If you’re a player who alternates farming Barbarian King and Archer Queen, then… In 87.5 days, you can complete 13 levels in total of BK and AQ. So that means that your Barbarian King and Archer Queen should both be at least level 34 before you hit that upgrade button. Why? Because if you alternate upgrading them, it will take 6 weeks to max the Barbarian King plus another 6 weeks to max the Archer Queen, but don’t forget, the Grand Warden costs Elixir to upgrade and farming Dark Elixir isn’t bad at Town Hall 11, so you can continue to alternate upgrading the King and Queen while also upgrading the Warden with Elixir. Get three heroes done at once!
Walls are also the hardest unit to upgrade because there are just so many of them and Gold and Elixir is quite scarce at TH11. So I also recommend that you at least complete all your level 10 walls before thinking about TH11 and at least half your defenses to max TH10 level.

So in summary, for you to upgrade to Town Hall 11: