After the December Update, there is no more free shields. So what should we do tto maximize the loot protection? In this post, I’m going to give you the most useful tips for protecting your base better. 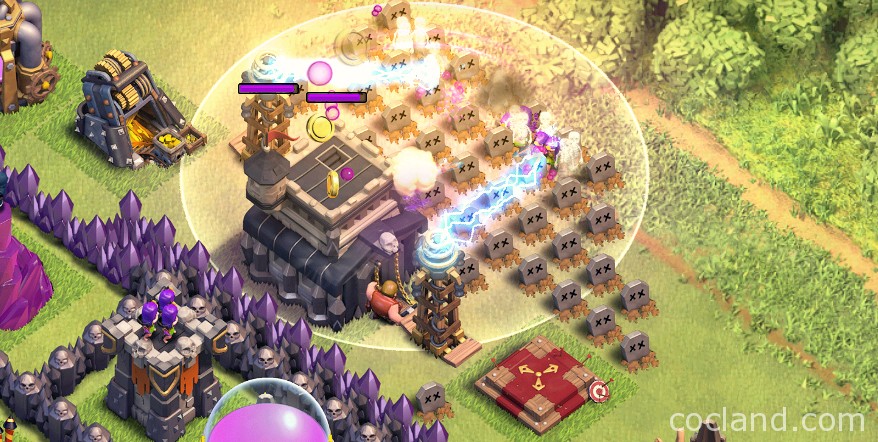 Do not remove tombstones from your base

Before the update, it was important to remove the tombstones from your farming base after an attack to show attackers that your base is active and traps are armed for intimidation. Which increased the probability that attackers would attack your outside Town Hall, giving you a free shield. As this will no longer be the case, you want to quickly attract bad attackers before the good attackers attack you. So keep those tombstones.

If your Town Hall isn’t centralized, then make sure the Clan Castle is guarding it

This is to force the attacker into using more troops so you get shield. As otherwise, trophy pushers will try to conserve their troops and still break in and snipe your Town Hall with their Archer Queen. You need to make sure they use more than 1/3rd your maximum housing space to get shield.

Place your collectors outside!

Place your Dark Elixir Drills behind your Gold and Elixir collectors and other non-defensive structures. Why? Because weaker attackers love attacking easy-to-get Dark Elixir, some don’t even know how to calculate how much Dark Elixir there is inside a drill so they even attack it without noticing that it’s empty. Having those drills semi-protected makes sure that attackers don’t just deploy a few troops and snipe your drills and leave, but instead destroy a bunch of buildings and also use a good amount of troops so you get that shield.

Move out more of your non-defensive buildings outside more (except your collectors), out of range of defenses.

This makes it easier for those attackers to simply use Archers to grab that 50% so they can get a shield if they are short of damage. Kind of like how people use Builder Huts in the corners of bases in wars to time out attackers. But the idea here is to help attackers get their 50%. Why? Because if an attacker sees that your base is easy to 50% with the most common farming armies such as Barch, BAM, Gibarch, then that attacker will be more keen on attacking you. And of course you want to attract these types of attackers, not those poor inefficient farmers who use armies like GoWiPe to farm with.

Make sure your Town Hall is protected more!

Remember, a Town Hall now carries loot equivalent to a Gold Storage + Elixir Storage and 1/4th of a Dark Elixir Storage. So make sure you have more defensive firepower covering the Town Hall.

But don’t forget to also have your Dark Elixir Storage well-protected!

It’s impossible to have a balanced protection for all your storages now, with so many storages scattered (adding in the fact that the Town Hall weighs more than 2 storages). Not only that, a lot of people are also forgetting the fact that Gold and Elixir Storages will now carry less loot inside them to steal (since the overall exploitable loot is shared with Town Hall). So they’re a little less valuable. Which means that you shouldn’t focus too much on securing everything in your core. If you have a bunch of storages and Town Hall in the core, then I can already tell you that that will be a bad base. Why? because that would mean you have a large core, and large cores are easy to break inside of and also attract heavier attacks (not Barch), and have less defensive coverage (because defenses are kept further apart).

Builders Huts should be outside

(unless you need them inside to fill in voids to act as decoys for Wall Breakers or for funneling purposes). Builder Huts are small and fragile, which is perfect for attackers to deal more damage on you because you want to get hit by 30% damage for shield, so who cares about the Builder Huts (sorry Builders!).

These are basically some of the “exploits” to the system. I agree with SC making the needed changes to prevent players from placing their Town Halls outside. What I don’t agree with is the whole complicated system. I’m not a fan of complication. If it’s not a simple fix, then you’re going to see drastic changes to the game and in time you’ll see people catching up with the flaws. It just doesn’t sound right that we have to now attract attackers in ways to obtain shield and minimize our losses. If I could give advice to the developers, I would start with one idea: Try your best to keep things as simple as possible. Success revolves around simplicity; a clear and mutual understanding by society.

Well, I hope this helps you guys with better results on defense and minimize your resource losses as much as possible with the new meta. Thanks for reading!