This TH8 war base is the second one from GarlicAK with anti-3-stars feature.

Although the Town Hall of this base design is quite exposed (an anti-3-stars base always has) and easy to be destroyed with 2 stars but it will be much harder to get 3 stars from this base.

No matter how perfect your base design is, almost other Town Hall 8 players can take at least 1 star from you. Also, in Clan War, 1 star is the same as a failure. So why we don’t care about the whole match instead of the Town Hall? 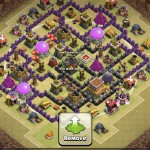 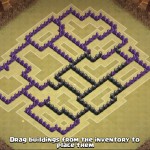 Truly, this base is not really more special than other Town Hall 8 war bases. It has all fundamental rules of a war base. Because of the easternmost and northernmost Air Defenses, the CC Balloons will have path away from the Air Defense to the Wizard Towers. No matter where the attackers drop the Hog Riders, they will run into the exaggerated path and be redirected to the Double Giant Bomb area. The Air Sweeper placement is based on an idea in the Air Sweeper Strategies guide.

How the traps work:

The group of 4 Bombs can make the attackers be confused because they don’t know where is the real Double Giant Bomb. You can swap them with two Giant Bombs as well. Spring Traps are placed between two defensive buildings to make the Hogs fly. Air Defenses are protected by Air Bombs. Two Air Seeking Mines are used for protecting the Air Sweeper and Air Defense. Skeletons traps are used to distract Dragons because they can’t do too much damage…Defense Logs

Here are the most recent war logs of this base design. Everything is perfect! 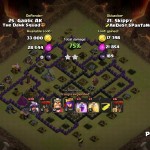 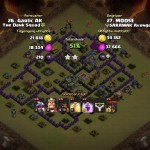 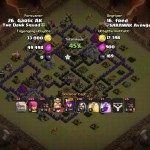 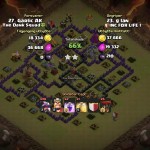 What do you think about this war base? Do you have any suggestions for it? 😀